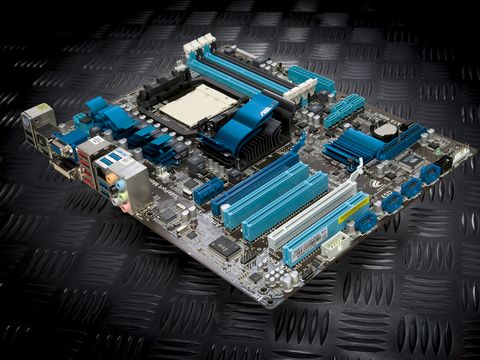 Colour me black. Colour me blue. Could Asus's 880G be the AM3 board for you?

It's stylish and has lots of great features. But there's better value to be had elsewhere

Asus is the name, impossibly slick motherboards is the game. Even this modest M4A88TD-V Evo model is still quite a looker.

For starters, like nearly all Asus boards it's immaculately arranged. Wherever possible, components are positioned in near-perfect little rows. It must make motherboard engineers from other companies weep onto their MOSFETs.

Then there's the natty blue-and-black colour scheme and expensive heatsinks for the northbridge and voltage regulation circuitry. It's nearly enough to make you assume this is a fine board without dissecting the details or seeing the benchmarks. Nearly enough, but not quite.

Not that the M4A88TD-V Evo doesn't stand up to close inspection. Asus has dropped in the SB850 southbridge rather than the older SB710 chip seen on some boards based on the AMD 880G chipset. Consequently, all five of the SATA ports are 6Gbps.

Further adding to the big bandwidth cred is the NEC USB 3.0 chip pumping 500MB/s per port to two sockets on the rear panel.

Where the 890FX can pony up two x16 electrical links, the 880G can only manage two x8 or a single x16. Of course, it's questionable whether the full 16 lanes is essential for dual-GPU gaming thanks to the enormous 500MB/s per lane delivered by PCI-e 2.0.

As for non-chipset-related shortcomings, you don't get a handy hardware switches for power, reset and clear CMOS. However, what you do get is the TurboV Evo auto-overclocking dip switch.

In practice it doesn't deliver terribly impressive results. Bumping up a Phenom II from 3.2GHz to 3.45GHz is hardly worth the bother. Still, Asus' comprehensive set of BIOS features and options goes a long way towards making up for that.

The core unlocker ensures you can make the most of AMD CPUs with hidden cores, while the Express Gate embedded Linux OS divvies up a quick booting option for fast access to the internet and media files.

All of which just leaves space for the minor matter of performance. Strictly speaking, the M4A88TD-V Evo delivers slightly patchy results in our application tests. It's joint fastest in video encoding, but a second off the pace in Cinebench. It's also a couple frames slower than the best in World in Conflict.

Likewise, sub-300MB/s in HDTach and a maximum bus overclock of 300MHz relegate this board to a mid-table position overall. But let's be clear. The margins are incredibly tight.