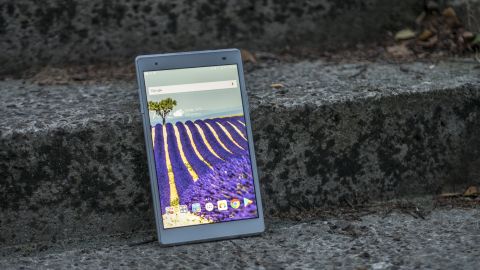 Aided by the relatively large 4,850mAh battery and the power efficient chipset, the Lenovo Tab 4 8 Plus is a battery champion.

Unplugging at 7am, downloading a few newspapers for the commute and using Bluetooth audio throughout, while spending several hours reading and watching video in the evening, we found it would easily last until midnight with an average of around five hours of screen on time.

With lighter usage (less video) this could stretch to three days of battery life, which is really rather good.

This is no doubt due to the optimizations that Lenovo has made on the software side.

Running the TechRadar video test (a 90-minute video played with the screen at full brightness), we found that the Tab 4 8 Plus lost 19% of its battery life, just short of the best performers (such as the New iPad, which lost 15%), but ahead of the likes of the Acer Iconia One 10, which lost 25% of its battery in the same test.

Though not quite at the top of the range, the Tab 4 8 Plus is certainly dependable in everyday usage.

It's always worth saying: don’t take photos with a tablet.

Ultimately, if it is an absolute must, the Tab 4 8 Plus is better than most, if nothing compared to almost any smartphone at a similar price point.

The Lenovo camera interface itself is relatively clean and simple. The various modes and functions are clearly labelled and easy to see, while, in a nice touch, there is also an HDR function. The app performs fluidly too, for the most part.

Not that this is of much use. Shots produced have a reasonable color representation and impression of detail – for a tablet – but fall to bits as soon as the lighting becomes challenging in the slightest.

Typically, scenes are over-exposed and washed out, in short do not rely on this as your primary photographic device.

In a business setting it will suffice for taking scans of notes and documents however, with just enough detail present.

Prev Page What's it like to use? Next Page Verdict and competition
TECH DEALS, PRIZES AND LATEST NEWS