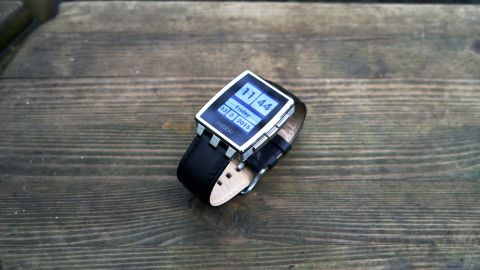 Sleeker, shinier, but still as connected

The Steel gets the core smartwatch functions right; customisable notification control, decent battery life and simple operation. It lacks features compared to the competition, but its reserved design means it'll blend into your life.

Wind the clock back to 2013 and the Pebble smartwatch was taking the fledging wearable market by storm, bringing notifications to the wrists of gleeful iPhone users.

It wasn't exactly a looker, and the e-ink screen was hardly eye popping, but it sold by the bucket load and it was no surprise when the swish metal and leather Pebble Steel swooped in.

A lot has changed since the Pebble's early days in the wearable market and the Steel now faces some seriously tough competition from the army of Android Wear watches plus the imminent Apple Watch.

Launched back at the beginning of 2014 the Pebble Steel took a while to come to market, and in that time more contenders arrived, so it's not sporting the latest technology.

It's not particularly cheap either, and at £179, $199 it's on par with the latest Android Wear offerings from Motorola, LG, Samsung and Sony.

That outlay gets you a 1.26-inch 144 x 168 e-paper display which has an optical hard coating to prevent it from getting scratched.

It's not a touchscreen, and that's the thing which most annoyed me when I first started to use the Pebble Steel.

I've used the LG G Watch R extensively as well as trying out all the other Android Wear smartwatches and it's a natural reaction to prod the screen, expecting something to happen.

Being forced to use the buttons on the side felt like I was taking a step backwards, but after a few days with the Steel I'd got used to not tapping the display.

The joy of the e-paper technology is it's perfectly readable even in direct sunlight, where as you can struggle with the Android Wear army, plus a LED backlight activated at the flick of the wrist means you can also see the time at night.

It's also has a lower power consumption, which means the battery inside the Steel lasts longer than its colourful rivals.

Don't be put off by the low resolution of the screen, as predominantly you'll only be staring at text - this isn't a device you'll be viewing pictures on, watching movies with or attempting some graphically intensive gaming sessions.

It may be low on thrills, but if the Steel can get the basics right it could be a winner.