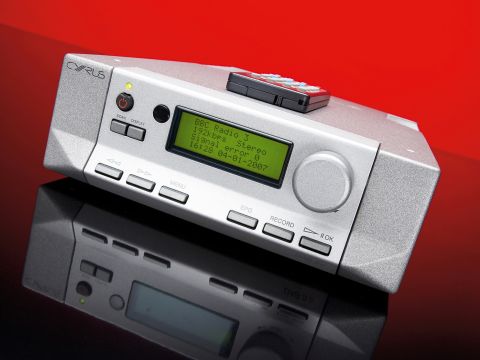 Despite the mild sonic shortcomings, this has plenty to recommend it to habitual radio listeners

Cyrus has put some high-tech products into its distinctive 'singing shoebox' case over the years, but never before has it offered a DAB tuner. Following rather than leading technological trends is no bad thing, though, as it allows the inclusion of the latest features. In this case, the outstanding feature is the inclusion of an SD memory card, plugged into a little socket at the rear.

Cyrus points out on its website that we're all well accustomed to time-shifting TV programmes on video recorders analogue or digital, and with tuners like this you can do the same for radio. The DAB 8.0 implements this sensibly and efficiently, storing MP2 data direct from the transmitted digits, obtaining a practical capacity of up to about 11 hours even at Radio 3's data rate (some 17 hours for most stations) on a 1GB memory card.

With a 1GB card selling for £8 at the time of writing and probably less by the time you read this, that's about the same cost per hour as a cassette. You can set recording start and end times directly on the DAB 8.0, making it an all-in-one solution to time-shifting, and it can also play MP3 files written to an SD card on a computer.

You can upload radio recordings to your computer via USB. That's not all, for the internal memory (separate from the SD card) allows pause and 'rewind' of audio, so that you need never miss the title of an intriguing song or that crucial line in The Archers.

The DAB 8.0 also receives FM broadcasts, though in that case the recording features don't apply (you do at least get RDS). It uses one of the latest breed of DAB/FM modules to decode both on the same chip, using signals from the same antenna.

This module is made by Frontier Silicon and does practically everything. Cyrus's contribution is the user interface, including the informative four-line display and the analogue output circuitry, plus of course the power supply. It's a nicely featured and nicely built bit of kit in every way.

Although there's precious little to choose between most DAB tuners on sound terms, this one actually has a weakness. It's not by any means crippling, but the DAB 8.0's noise residual is definitely not as low as it might be.

Having said that, we proceeded to convince ourselves that the effect on most broadcasts is negligible. However, with good quality sources it's possible to hear - in direct comparisons with other DAB tuners - that there's a trace more hiss present and as a result a little less detail and image depth.

It's a shame, as it must obviously weaken our recommendation of what is in all other respects, one of the best DAB tuners around. You can use it with an external DAC, of course, in which case watch out, as our sample had the channels reversed through the digital output, a fault we can't remember encountering before in consumer audio equipment.

FM sound is, as so often in dual-mode tuners, rather less than impressive, unclear and tonally uneven compared with good FM-only models. For occasional listening it will be fine but don't throw out any old faithful FM tuner on its account!