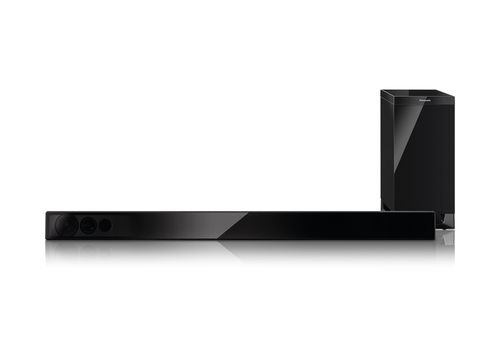 At over a metre wide, the SC-HTB520 soundbar is a candidate for wall mounting

The Panasonic SC-HTB520's sheer presence will spoil the immaculate appearance of your TV on its stand, but with a Hobbit-esque height of less than 8cm it shouldn't affect viewing or block the IR receiver for your TV.

Should it need to, the SC-HTB520 can also pass on commands from your TV's remote control to the screen via an IR blaster. A much more elegant solution is to mount both screen and bar on a wall, and the SC-HTB520 is supplied with two brackets for this purpose.

The 120W gloss black subwoofer is as attractive as these things get, plus it can be squirreled away out of sight behind the sofa, thanks to its wi-fi connection to the main unit.

The straightforward two-way, two-speaker, bass reflex layout of the main unit is faintly visible behind the non-removable grille that covers the entire front. With no LCD display to use, trying to balance the subwoofer and main unit's separate volume controls proves to be a bit of a lark.

The SC-HTB520 isn't interested in anything analogue, wearing its digital stripes with pride. With two v1.4 HDMIs and a digital optical audio input, the idea is that you route sound and picture from a Blu-ray or DVD deck to the HDMI input and optically connect from your screen's digital output.

The HDMI output then pipes the video signal to your screen, but this socket can also receive your TV's sound output if the latter has an audio return channel (ARC) HDMI. This also frees up the digital optical socket for use with Dolby Digital signals from a console, Sky HD or Virgin Media TiVo box.

Curiously, every time I switched the unit on it defaulted to the TV input within five seconds, even without an ARC feed or an optical cable connection and I manually had to reselect the HDMI input.

An onboard decoder is equipped to handle DTS and Dolby Digital signals, which are output as pseudo-surround Dolby Virtual Speaker and the unit can accept up to 7.1-ch linear PCM.

Operating the system couldn't be easier; you simply select the source and adjust the volume levels of both units. Dialogue in particular really stands out. With the Monsters Vs Aliens Blu-ray wedding scene, the dialogue between Derek and Susan is crystal clear.

On a more subtle level you can even make out the rustle of her veil at the altar, and as the church falls apart you feel the creaking wood and impact of the tower as it smashes on the ground. All in all, everything feels nicely controlled.

However, other sources reveal how bass-heavy the main unit is. With the sub turned right down, the double bass of The Wire's theme tune vibrates uncomfortably, while MTV Eminem's Lose Yourself has too much thud. Despite this, vocals always shine through and the overall effect is certainly positive.

While you can't crank things up high and the so-called pseudo surround is not even pretending, the general improvement over any TV's speakers is immeasurable