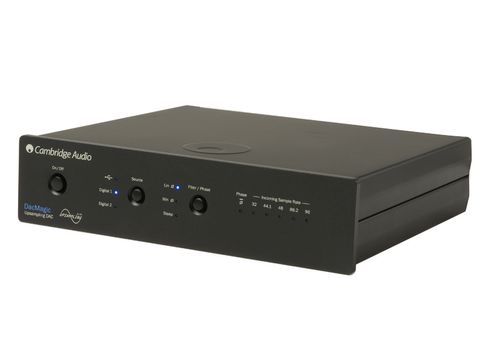 The performance of the DACMagic is so good it's almost embarrassing. Not only does it sound great, it locks to incoming signals almost instantly and takes up very little space. Balanced output too – what more could one want?

The name of this little box of tricks may ring a bell: Cambridge Audio has had a DacMagic in its range before, but the last one disappeared a while ago when DACs appeared to be in terminal decline. Now they are back and the name has been revived for what is, in fact, an all-new product.

A major reason for the resurgence of DACs in general, is the proliferation of digital audio sources, especially computers. Cambridge has catered for this by providing the DacMagic with three inputs, USB, 'traditional' phono and optical S/PDIF.

There are plenty more connectors on the back panel, because Cambridge has also provided a digital output (both flavours), while analogue audio signals appear in both unbalanced and balanced form – a welcome surprise at this price. The last socket is for the external power supply, important in enabling the DacMagic to inhabit such a small case.

Plenty of manufacturers would doubtless be happy enough to be able to offer a completely basic DAC for £200, but Cambridge is on a bit of a roll with its enhanced feature sets.

As a result, we are treated to a version of the deluxe upsampling technology first seen in the 840C and 740C CD players from the Azur range.

In the 740/840 models it upsamples to 384kHz: here, a more modest version upsamples to 192kHz, but adds the flexibility of three filter types: 'linear phase', 'minimum phase' and 'steep'. The differences between these filters are in some ways subtle, but may be significant in determining the DAC's sound.

Linear phase is the type of filter most commonly used in up/oversampling players, since the very first Philips' machines in the early 1980s. It gives no phase shift at all within the audio band and rolls off very sharply around half the sampling frequency.

As most commonly implemented, it has rather limited attenuation at exactly half the sampling frequency and, as a result, allows a little bit of aliasing distortion to occur if there is any audio above 20kHz. There is also pre-ringing on transients, though this has never been shown to be a real problem.

Minimum phase filters do without the pre-ringing, but do have some phase shift in the audio band. The actual frequency response is, to all intents and purposes, identical to that of the linear phase filter. The 'steep' option, meanwhile, is another linear phase filter, but with faster roll-off above 20kHz so that, effectively, no aliasing occurs.

There is slightly more pre-ringing than with the linear phase filter. This needs a little more processing power than the other filter types, but it should theoretically be the best of the lot – except that this one adds a small, but not vanishing amount of passband ripple, something of poorly understood subjective significance.

Whatever the theory says, it's good to be able to choose. The same is true of absolute phase, which can be inverted digitally by the DacMagic. All this wizardry is achieved by a Texas Instruments digital signal processing chip, aided and abetted by DAC chips from Wolfson and some decent op-amps and passive components.

The unit is compatible with sample rates up to 96kHz at 16- or 24-bit resolution. Physical assembly is neat and tidy and practicality is aided by the option of horizontal or vertical mounting for the unit – for the latter, a nonslip rubber base is provided. We were particularly impressed with the user manual, which goes into unusual detail in explaining what the DacMagic does – and how.

Still, you don't listen to a user manual. We did listen to the DacMagic, though, with interest and increasing admiration as time went on. We were hardly surprised to find it ticked all the boxes on basic tonality and detail: most digital components do, these days. Happily, it seems to go some distance beyond that and it gives some well-respected DACs at considerably higher prices a pretty good run for their money.

It's probably worth getting a word or three in at this point about the filters, because they do indeed have an important effect on the sound – nothing gross, but the way the sound registers on the ear over the course of a prolonged track varies between them.

To the extent that each can be succinctly summarised, the linear phase is clean and tidy with a particularly well-controlled bass, but can sometimes seem a little clinical by comparison with minimum phase, which seems slightly warmer but perhaps a shade less precise.

Meanwhile, steep is superlatively detailed in simple music – single voice/instrument, or just a few – but slightly loses out to linear in very dense textures.

All that said, we would probably live happily with any of them, but while the keen tweaker may want to experiment and perhaps adopt preferences based on musical style, we ended up listening mostly to linear.

Apart from anything else, we just loved the clean but always extended and tuneful bass this setting gave, with an utterly convincing sense of timing that made the most of the rhythmic qualities of any musical style.

One tends to associate rhythm particularly with music for dancing or marching but, of course, it's no less important in a string quartet or ballad, just in a different way.

Indeed, it was with such pieces that we were aware of the DacMagic's clear precision in presenting the timing of each instrumental part. But yes, before you ask, it can also make the most of a dance track.

State of the art DAC

Tonality is exceptionally neutral, with clean extension at both extremes and very well-balanced midrange.

One often finds that certain instruments or voices seem slightly favoured, but we could detect no such effect here and were particularly struck by the way in which multiple voices coexisted without interfering with each other.

That seems an obvious requirement, but it's surprising how often it's not quite met – one finds that the entrance of a male voice puts a female one slightly in the shade, or vice versa.

There have been concerns voiced that USB is intrinsically a more jittery interface than regular S/PDIF, so we tried our best to hear any differences between the various options. Frankly, we couldn't – certainly not consistently. Nor could we measure any, the DacMagic turning in measured results which in every way qualify it being as state of the art.

Standards of CD replay being what they are, it probably won't lift many modern players beyond recognition, but it could give a new lease of life to some older models and for computer-based music replay it is an excellent choice.

The Cambridge Audio DacMagic is practical and good-looking too and we would rate it all-round as one of the best audio bargains we've come across in a while.