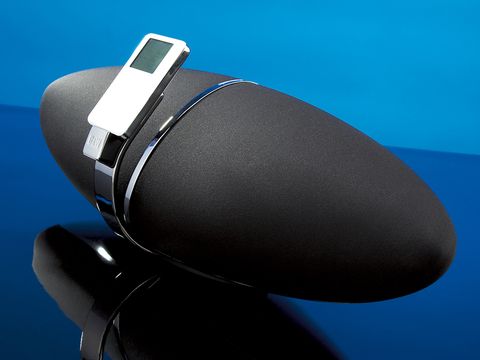 The functionality of the Zeppelin is basic, given the price of the system

Yes, this is style over substance, but the same could be said for the iPod itself. The sheer volume and room-filling scale of the sound is impressive. However, the sound lacks the subtlety of dynamic shading that good hi-fi can produce

The Zeppelin is an integrated iPod dock complete with digital amps and built-in speakers.

The dock itself sits on a sturdy chrome outrigger that stands proud of a chrome bar and has a reassuringly sturdy feel when accessing the iPod's functions.

The power cable, USB port, toslink digital connector and stereo minijack (for external sources) lies at the rear. There's also a composite and S-Video connector for playing iPod videos on your telly and a pair of rear-firing bass ports, one for each 'speaker'.

The two black grilles hide the speakers, giving the dock its 'Zeppelin' look (actually, it's dimensionally closer to a scaled-down 30 St Mary Axe - 'the Gherkin' - laid on its side).

Each side of the speaker holds a 25mm tweeter unit and a 90mm slotted woven fibreglass midrange cone and both of these are powered by their own 25-watt amplifier. A 125mm bass driver, driven by its own 50-watt amp and matching, pebble-shaped piano gloss remote completes the package.

There's some subtle digital signal processing going on inside the Zeppelin, too. This tailors the output of the Zeppelin, according to the volume level, to make it sound consistent virtually irrespective of room size.

It also allows you to charge most iPods while connected and a multicoloured LED on the left speaker describes Zeppelin and iPod status.

The functionality of the Zeppelin is basic, given the price of the system.

The pebble remote has rudimentary iPod controls, but fights shy of the iPod's menus and playlists. It's a simple product to install, however; because all you have is a choice of whether to use the additional rubber foot, or not.

The system is impressively powerful for an iPod dock; we can envisage these units being used to pump out dance tracks in every gym in the land.

There's also an admirable sense of separation; not stereo separation, but the ability to separate individual instruments within a mix is very strong. The last time we heard sounds so clearly differentiated from a unit this small, it had both Meridian and Ferrari badges on it.

It's not an F80 though. There's a distinct lack of dynamic range here that apes the performance of the iPod, which makes everything sound like it's playing at the same level.

It may well be a very loud level, but when you are playing something like The Pixies (or, of course Led Zeppelin), you expect the quiet bits to be very quiet and the loud bits to be very loud; here everything is all at the same level.

This is endemic to modern recordings and to iPod material not recorded in Apple Lossless; unfortunately, the Zeppelin throws this into sharp repose.

Led Zep puns are a cheap shot here, but one that's impossible to resist. This is no Black Dog and it's good for Rock and Roll, but there remains a Communication Breakdown between the Zeppelin and hi-fi.