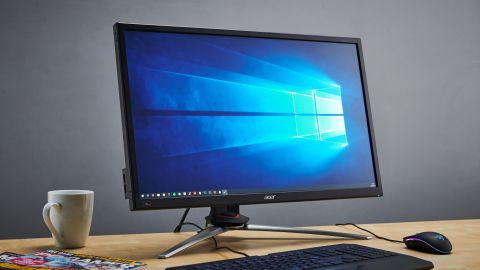 Acer just added to its 27-inch 4K 144Hz gaming portfolio with the most affordable model yet. The new Nitro VX3 may be cheaper, but it loses little in gaming performance.

In the market for a 27-inch 4K 144Hz gaming monitor? Then things just got interesting. Such screens normally come with hefty four-figure price tags. But the new Acer Nitro XV3 is shaking things up.

It’s just one of three 27-inch 4K 144Hz models Acer now offers. And it’s by far the cheapest, coming in well under $1,000 / £1,000. Granted, it’s still expensive enough to be out of reach for many gamers. But when you consider that Acer’s own Predator X27 is nearly double the money, the ASUS ROG SWIFT PG27UQ actually is double the money, and the Acer Predator XB3 will cost you several hundred more in dollars or pounds, suddenly the new Nitro XV3 seems like a bit of a bargain.

Of course, with the lower price you lose some features and functionality. The question is whether you lose so much that the XV3 qualifies as a false economy. Time to find out.

At $779 in the US, the Acer Nitro XV3 is way cheaper than other 27-inch 4K 144Hz gaming monitors, even if it’s still a pretty stiff investment.

In the UK it’s not quite as keenly priced at about £845, ditto Australia at AU$1,388, but we expect the price to drop a little soon to come more in line with US pricing.

If you're a US-based gamer, then the Acer Nitro XV3 will appear to be particularly good value.

At first glance, the new Acer Nitro XV3 looks like a dead ringer for its Acer Predator XB3 sibling. You get very much the same chassis and stand design bar minor cosmetic features, such as the ‘Acer’ rather than ‘Predator’ branding on the lower bezel and the cheaper Nitro model’s silver stand feet versus black items on the Predator.

The Nitro even comes with the same clip-on hood as the Predator, which is designed to minimise glare. Overall, it feels reasonably well put together, even if black plastic rather dominates proceedings, and boasts a robust and fully adjustable stand.

As for the panel specs, for the most part, the two screens look like dead ringers, too. In both cases it’s an IPS panel with 3,840 by 2,160 pixels, a maximum refresh of 144Hz, 1,000:1 static contrast and 90 per cent coverage of the DCI-P3 colour space. What’s more, both screens are HDR400 certified, which technically makes them HDR capable, but only in strict terms.

The HDR400 standard is the very lowest level of HDR compatibility and the peak brightness of 400 nits it implies is a long way off the 600 or 1000 nits produced by true HDR monitors. For the record, you don’t get USB Type-C connectivity, which is a bit of a pity.

Anyway, at this point you may be wondering why anyone would choose the more expensive Predator model over this Nitro XV3. The most obvious answer is adaptive sync technology. The Nitro XV3 makes do with AMD’s FreeSync, where the Predator packs Nvidia G-Sync.

On paper, G-Sync is more sophisticated and implies greater quality control. It’s also a lot more expensive thanks to a dedicated hardware module that must be fitted to the display.

However, FreeSync has come a long way since its launch. Thanks to Nvidia’s recent driver updates, FreeSync is now supported by Nvidia graphics cards. So, you’re no longer tied to AMD graphics hardware to make the most of a FreeSync monitor.

If there is an objective downside to the whole FreeSync versus G-Sync contest in this context, it’s that the Nitro XV3 is limited to 120Hz in FreeSync mode where the Predator can maintain the full 144Hz in G-Sync mode. On paper, that doesn’t seem like a huge compromise to make for the cost saving.

Fire up the Acer Nitro XV3 and you’ll struggle to subjectively pick it from its more expensive siblings. That’s true even of the much more expensive Acer Predator X27 if you’re running in SDR rather than HDR mode. The more expensive X27’s local dimming capability and higher peak brightness give it a clear edge when it comes to displaying HDR content. It’s both brighter and capable of much, much stronger contrast.

Of course, while HDR content is becoming more widespread, both in terms of games and video, it’s far from ubiquitous. For SDR content, the Nitro XV3 offers essentially the same excellent image quality from its colour-accurate IPS panel.

For starters, that means a very tight pixel pitch by desktop monitor standards thanks to squeezing the 4K native resolution into a relatively compact 27-inch panel. The upshot is razor-sharp image quality and oodles of detail. The downside is that at 27 inches, this is far from the largest and most cinematic display you can buy for similar money.

The XV3’s viewing angles are likewise beyond reasonable reproach and the color balance pulls off the neat trick of being both vibrant and natural. That said, the XV3’s default calibration could be a little better, with noticeable compression in both black and white scales.

It’s not something you’ll notice in normal use and anyone who wanted to ensure color accuracy could dial it out with calibration. But it’s perhaps indicative of the XV3’s lower cost some attention to detail here has gone walkies.

Anyway, the XV3’s core capabilities make for some pretty spectacular results in-game. Fire up something with colorful, vibrant visuals like, say, Witcher 3, and it looks utterly glorious running at 4K and high refresh on an IPS panel.

Speaking of the high refresh, subjectively you’ll struggle to pick 120Hz from 144Hz, so it’s a minor inconvenience to make that step down when enabling adaptive sync on the XV3.

The caveat to that is, of course, the fact that you will need some very serious graphics hardware to drive this monitor at native resolution and high refresh rates. Indeed, even with the very fastest graphics cards, it’s not possible to make the most of the triple-digit refresh rate capability in some games when running at full detail.

Finally and for the record, as with its Predator sibling, the Nitro XV3’s hood is of marginal value. It clips on quickly and easily, but isn’t hugely effective for reducing glare and makes the XV3 look pretty fussy and frumpy.

The primary conundrum facing the Acer Nitro XV3 is whether it gives too much up in return for the cost savings it offers versus other 27-inch 4K 144hz panels. For the most part, we’d say no.

If you absolutely must have the best possible HDR support, this isn’t the panel to go for. However, even the most expensive screens in this segment – ones that offer local dimming technology – are far from the last word in HDR rendering. HDR support in games and video content is hardly universal, either.

Thus, we’d recommend putting HDR support to one side and consider the XV3’s other attributes. As a high-refresh 4K SDR panel, in subjective terms it delivers a very similar experience as more expensive models.

On-paper differences such as 120Hz versus 144Hz refresh with adaptive sync enabled don’t amount to much in practice.

The Nitro XV3 therefore makes for conspicuous value in this particular segment. How it fares in the context of the broader monitor market is more challenging. At this price point you have a lot of options, many of them bigger and bolder. Likewise, while 4K makes for fantastic detail, it doesn’t half hobble your graphics subsystem.

Just be aware of the downsides to 4K in terms of performance and the knock-on effect it can have in terms of the cost of supporting hardware like graphics card. If you have all that in mind and still want to pull the trigger, this is surely the most cost effective option you currently have.