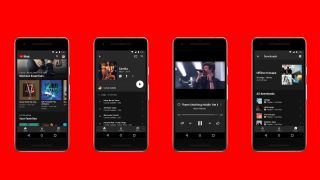 Music on YouTube is big, Really big. More than 1 billion people visit YouTube for music each month. But it’s never been brilliant as a straightforward listening service.

Its latest offering, YouTube Music, is designed to change that. But with Apple and Spotify dominating music streaming, is YouTube Music too little, too late?

Yes, it does: Google Play Music.

What’s the difference between YouTube Music and Google Play Music?

They have different libraries. With YouTube Music you don’t just get official songs. You get the very many remixes, covers, live versions and parodies YouTube hosts too, as well as music from people who haven’t got record deals. And of course you also get video.

Other than the aforementioned tracks, YouTube Music can search for particular lyrics and even use natural language: Google says you’ll be able to search for “that hipster song with the whistling”.

The app will also offer contextually aware recommendations, so for example if you’re at the airport it’ll create a playlist about fire, crashes and death.

Don't worry, it won't really. But it will suggest pumping tracks for the gym or relaxing music before you travel. Discovery is clearly going to be a big part of the YouTube Music experience: it will offer thousands of themed playlists for particular genres of music or moods.

There is and it's ad-supported.

That’s a good question. It’s being rebranded as YouTube Premium and will now include YouTube Music as well as Google Play Music. Because it also offers offline video it’ll be more expensive at $11.99/£11.99 per month. If you’re a YouTube Red subscriber in the US, Australia, South Korea or Mexico your monthly fee won’t go up when Red becomes Premium. But if you’re not already a subscriber and you just want ad-free video, the price just got hiked.

You can try Try YouTube Premium free for three months here. There is also a Family Plan in the UK that will cost £17.99.

If I pay for YouTube Music, will it get rid of all the ads on everything?

No, just the ones on music. If you want to remove the ads from everything you need YouTube Premium.

If you’re in the US, Australia, New Zealand or Mexico the rollout started on Tuesday 22 May with an early access programme. A wider rollout happened 18 June so Austria, Canada, Denmark, Finland, France, Germany, Ireland, Italy, Norway, Russia, Spain, Sweden, Switzerland and the United Kingdom now all have access.

Google has redesigned its mobile app and created a new desktop player for YouTube Music, but we’d expect it to work in your web browser too. After all, it’s YouTube.

It doesn’t make sense to run two similar streaming services under the one roof. Google Play Music’s days are clearly numbered. Although this isn't confirmed, we did get word as to why the two apps still co-exist.

Is YouTube Music a Spotify or Apple Music killer?

That's a tough one. Sheer numbers wise that's going to be tough. As of January 2018 Spotify had 70 million paying subscribers and Apple Music is expected to overtake it in the US this summer – and partly because everybody knows that YouTube is a free thing that is free. According to the International Federation of the Phonographic Industry (IFPI), 85% of YouTube users go there to listen to music for free.

We think the bulk of YouTube Music users are going to stick to the ad-funded version, and that a fair few will do so while running adblocking tools.

Don’t forget about Amazon, either. Its Alexa push is potentially putting Amazon Music into a lot of homes.

The big problem here is that Google and its video creators don’t make a ton of money from subscriptions – it’s an advertising business, and that’s where the money is. Speaking to Digiday in February, network executives said that YouTube Red was only bringing in around 7% of “YouTube-monetised” revenue. When other sources of income such as sponsorship were taken into account that figure was as low as 1%.

To be fair, the lack of interest in YouTube Red is partly because YouTube Red was only available in a handful of territories. But one of those territories is the US, which is the largest market for streaming music in the world. There are 30 million people in the US paying to stream music. Very few of them are YouTube Red users.

There’s another issue. In late 2017, Billboard announced that it will devalue YouTube streams in the algorithms it uses to calculate chart placings. In plain English that means for the charts, a Spotify, Tidal or Apple Music stream will be worth more than a YouTube one. If you were a record company, that will affect where you decide not just to run your ads but where you carry out promotions such as the service exclusives that drive so much traffic. Initially at least, that’s going to make YouTube Music less attractive than its streaming rivals.