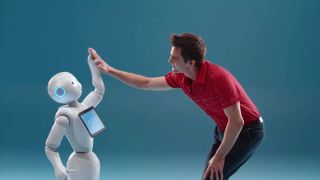 From Fry and Bender in Futurama, to Data and the crew of the USS Enterprise on Star Trek: The Next Generation, to deceptive Ava in Ex Machina, robot friends are a regular trope in science fiction. After all, is the idea of being pals with a mechanoid any weirder than Captain Kirk’s intergalactic romantic life?

But… could this ever happen? Could we one day be going for a drink with our robotic pals? Or are the machines destined to remain our slaves?

The first challenge when it comes to forming friendships is talking and exhibiting intelligent behaviour. This question goes back to one of the earliest challenges in computer science. In 1950, computing pioneer Alan Turing famously laid down the benchmark for this with what became known as the Turing Test. The test is essentially quite simple: Can a machine successfully trick someone into thinking that they are talking to a human?

Since then, there is still yet to be a definitive example of an AI passing the test - though there have been numerous claims. For example, in 2014 it was claimed that a piece of AI software called Eugene Goostman had achieved the milestone. But this has also been disputed because, for example, the creators of Eugene said that their AI was simulating a 13 year old Ukrainian boy, which critics argue is an attempt to explain poor English and comprehension. In their view it was essentially a bit of a cheat.

So when can we expect an AI to pass the test? Futurist Ray Kurzweil, who is currently working for Google on a number of technologies linked to AI, such as natural language programming, reckons computers might finally match up to humans in 2029.

Perhaps though, simply talking to a machine isn’t really friendship, is it? When we think of friendship we think of people hanging out together, going for drinks and long walks on the beach. So can robots ever manage that?

The company that has probably come closest is Hanson Robotics, which is on a quest not just to build intelligent robots - but lifelike ones too. Founder David Hanson started career as one of Disney’s “imagineers”, but founded the company because he wanted to “create genius machines that are smarter than humans and can learn creativity, empathy and compassion”.

His most advanced robot so far is called Sophia, and is designed to look like Audrey Hepburn. “She” has a fully expressive face, can process language and “see” stuff too. It’s easy to imagine that as technology continues to improve, her ability to mimic real human expressions will only get more realistic.

This is inevitably a problem that any robots that aim to mimic humans are going to encounter. According to The Big Think, the number of academic papers citing the phenomenon has jumped from 35 in 2004, to 510 in 2015 - suggesting that it could be something that roboticists are already encountering.

But let’s assume that one day scientists can successfully bridge the uncanny valley, and are able to trick us with Turing Test smashing robots: can this ever really be called friendship? This is perhaps more of a question for philosophy than technology.

Dr John Danaher has written on this subject for the Institute of Ethics and Emerging Technology, and he is more sympathetic to the idea of robot friendships than many of his peers.

In his piece, he defines three different types of friendship that people can have: Utility friendships - such as having rich friends who get you access to stuff you otherwise couldn’t. Pleasure friendships - where the value to you comes from your interactions with that person (the example he gives is a tennis partner, from whom you derive pleasure by playing together). And perhaps most deeply, there’s what he calls “Aristotelian” friendships, where you share values, concerns and interests with the other person - and where interactions are mutually enriching. According to the literature that Danaher cites, these latter relationships are founded on certain preconditions, like honesty between the two parties, and that you both think of each other as equals.

Essentially, he argues that in the first two cases it would be relatively easy for robots to replicate: it’s easy to imagine how you might want to use your utility friendship with C-3PO to climb the social ladder and get invited to parties with Princess Leia. Or perhaps you might enjoy playing tennis with the Robot Federer 3000 because it provides a good challenge at your level ability.

The third category - Aristotelian friendships - are more difficult because, well, how can robots be authentic or share your values and concerns when it is just a machine simulating these things? Essentially, this means that however good technology gets, it is intrinsically not possible to have a genuine, deep friendship with a robot.

However - this is where Danaher disagrees. He argues that this isn’t so different from our interactions with other humans. We might believe that our pals share our values and are acting honestly, but just as with robots, we have no great insight into their inner mental life - all we have to go on is the stuff on the outside, just like with robots. And if you think the brain is just a machine following rules, why would a brain that has been simulated in silicon be any different?

In any case, Danaher argues that while we might struggle to form “Aristotelian” friendships with robots, there is already examples of people forming the first two kinds of attachments - such as soldiers who held a military funeral for a bomb disposal robot, or…. Well…. Some weird men and their sex bots. (Yes, we made it almost to the end of the article without mentioning sex bots.)

So will we ever be friends with robots? The technology is clearly heading in that direction, but there is still a philosophical argument to be had. But hey, if we ever do, let’s hope our robot pals are more like Bender and Data than Ava.