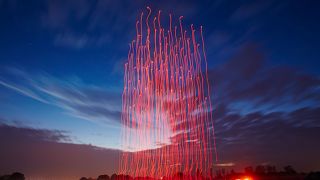 If you weren't aware, the world record for the number of drones kept airborne simultaneously has been smashed. A team of Intel engineers got 100 drones taking off in unison in November last year, though the footage of the event has only just been released.

Flugplatz Ahrenlohe in Tornesch, Germany was the site of the record-breaking Unmanned Aerial Vehicle (UAV) manoeuvre, and the final touch was added with a live performance of Beethoven's 9th Symphony.

Controlled remotely from the ground, the drones were fitted with lights that shone in time with the music. A small crowd of spectators was invited to the performance and Guinness World Records adjudicator Pravin Patel was on hand to confirm the record had been broken.

Intel worked in collaboration with Ars Electronica Futurelab on the project "to push the limits of the UAV industry and show what UAVs can be used for" according to Guinness World Records.

"It's years of effort, development and hope exploding in one minute," said one of the engineers working on the endeavour. All of the UAVs made it safely back to the ground after the light show had finished.

The previous record was 50 drones, flung into the air by a team of researchers from the Naval Postgraduate School in Monterey, California, USA. As drone technology gets more and more complex, this is a record that's likely to be broken many more times in the future.