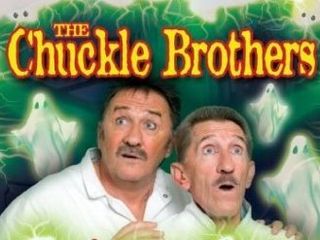 Cameron, eat your heart out

The greatest children entertainers of all time (well, on a par with the cast of Rentaghost), The Chuckle Brothers are to release a 3D movie of their exploits which is set to be more 'to me, at you' rather than 'to me, to you'.

In what could well be the movie which knocks Avatar off of its po-faced 3D perch, The Chuckle Brothers have revealed that not only are they making their first movie but it will be in another dimension.

"We've always wanted to do that and there is one in the pipeline now for us to do next year. That is very exciting.

"We'll probably be doing that in May, June time. It is a spoof horror and it's going to be in 3D, which is another first for us. We've never been in 3D before."

Spoof Horror? 3D? Consider us sold. Personally, TechRadar is hoping that the movie is more Spooky Goings On than Spooky Goings On 2, though if the plot has any of the pathos of the Brothers' earlier TV effort Doctor What & the Return of the Garlics, then we will be more than pleased.

Interestingly, this is a mere year after James Cameron hit the big time with The Terminator.

Although Cameron's and the Chuckle's careers have taken decidedly different paths since then, it will be interesting to see if in 2011 The Chuckle Brothers 3D will be the movie which truly brings 3D to the mainstream.