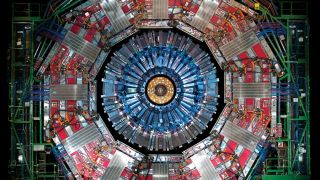 The physicists at CERN are celebrating today, having smashed through the previous record energy for particle collisions. At 10.59am on November 25, the Large Hadron Collider hit an energy about twice as high as that of any previous collider experiment.

The massive jump was made possible by a lengthy maintenance period that took the supercollider offline between 2013 and 2015. It came back online in April, and has since been working its way back up to full capacity.

With the new energy levels, the particle accelerator will smash together positively-charged lead ions - lead atoms stripped of electrons.

The goal is to simulate a state of matter that existed shortly after the Big Bang, reaching temperatures of several trillion degrees.

"There are many very dense and very hot questions to be addressed with the ion run for which our experiment was specifically designed and further improved during the shutdown," said ALICE collaboration spokesperson Paolo Giubellino.

"It is a tradition to collide ions over one month every year as part of our diverse research programme at the LHC," added CERN Director General Rolf Heuer.

"This year however is special as we reach a new energy and will explore matter at an even earlier stage of our universe."