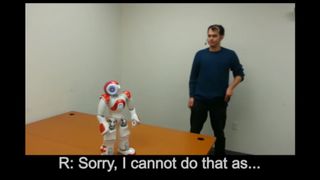 If you were looking forward to a world where robots would do all the dirty work, performing as mechanical slaves for humans, then you're not gonna like this. Robots are being taught how to reject human orders.

Engineers at Tufts University's Human-Robot Interaction Lab are working on mechanisms for robots to say no to humans, as long as there's a good reason to do so. You can see an early version of their technology in the following video:

As you can see in the video, the research is not just about knowing when to reject an order, but also providing a framework for the robot to explain why it rejected the order and being open to a change in circumstance.

"Future robots will need mechanisms to determine when and how it is best to reject directives that it receives from human interlocutors," wrote Gordon Briggs and Matthias Scheutz in a paper describing their work.

For bonus fun, here's a human trying and failing to persuade a robot to walk into a wall of cans: