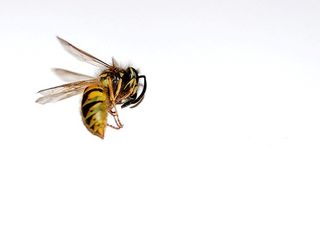 Have you ever seen a bee crash? No. Clearly you haven't, because they are not like human-built planes, a well-known fact that aerospace engineers are finally taking on board when designing safer planes.

The humble bumble bee can fly upside down and land on pretty much any surface you put in front of it. Planes, on the other hand, cannot. Yet.

Scientists have now figured out how bees manage to negotiate difficult landings, and are using this know-how to design safer automated aircraft that would be able to make perfectly gentle automatic landings.

Who thinks about bee landings?

"This is something an engineer would not think of while sitting in an armchair and thinking about how to land an aircraft," notes Mandyam Srinivasan, a neuroscientist at the Queensland Brain Institute at the University of Queensland and the Australian Research Council's Vision Centre in Brisbane.

"This is something we wouldn't have thought of if we hadn't watched bees do their landings."

Basically, bees gradually slow down to a stop by adjusting their speed as the size of their target appears larger.

The Australian researchers followed the landing flight paths of bees using high-speed cameras which showed that bees slow to a hover at 13 millimeters (about half an inch) away from their landing target, suggesting bees use their eyes to measure that exact distance.

"We would like to make spacecraft that do smooth, flawless dockings. Whatever bees are doing must be computationally simpler than what we are doing now."