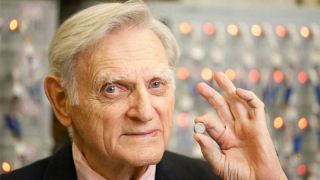 A team of researchers at the University of Texas, led by John Goodenough - the inventor of the lithium-ion battery, has developed a crucial component that could pave the way for cheap, safe sodium-ion rechargeable batteries.

Batteries have three main components - an 'anode', a 'cathode' and the 'electrolyte'. Chemical reactions in the electrolyte cause a build-up of electrons at the negatively-charged anode, which then flow through a circuit back to the positively-charged cathode.

Goodenough and his team have been working for several years on sodium-ion batteries, which offer a promising alternative to the lithium-ion cells used in smartphones, laptops and electric cars around the world. Sodium is much more common than the far rarer lithium, making it much cheaper.

To date, sodium-ion batteries have suffered poor performance, weight and safety compared to their lithium-ion cousins, but now Goodenough believes he's found a cathode material that could change all that. It's made of a non-toxic and inexpensive mineral called eldfellite.

"At the core of this discovery is a basic structure for the material that we hope will encourage researchers to come up with better materials for the further development of sodium-ion batteries," said Preetam Singh, a postdoctoral fellow and researcher in Goodenough's lab. ''We believe our cathode material provides a good baseline structure for the development of new materials that could eventually make the sodium-ion battery a commercial reality."

Details of the discovery were published in the journal Energy and Environmental Science.