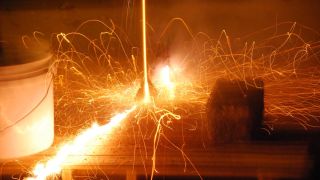 The power of lasers

This week we've seen some amazing things and heard some very bold claims indeed. From a blind man having his sight restored by stem cells to a massive explosion on the Moon that no one seems to have noticed, until now.

But the biggest news of the week happened to be centered around proof of cold fusion -- the holy grail of energy production. Is it true? Have we really found the solution to all our clean energy problems? Not so fast.

Is Cold Fusion finally a reality? -- Andrea Rossi, an Italian entrepreneur famous for his 'E-Cat' low energy nuclear reaction kit is back again, this time with so called "proof" that his cold fusion reactor actually works and generates more energy than is put in. Despite what you might read in other publications, it hasn't been proven, yet. Instead, Rossi has apparently had scientists over to "verify" his claims.

While the scientists have supposedly been able to verify that indeed more heat is coming out of the thing than is put in, Rossi's company maintains the secret to success is, well, a trade secret. Therefore, as it stands, people are basically being asked to validate a black box, without knowing precisely how it works, which isn't the way science operates. So, until full disclosure, and proper independent verification is possible, take these new cold fusion claims with a pinch of salt. Not that we won't be happy to be proven wrong, of course, because cold fusion could hold the key to safe, sustainable energy for the future. [arxiv]

Stem cells amazingly restore blind man's sight -- A trial of human embryonic stem cells has successfully restored a blind man's sight to the point where his vision is good enough for him to drive again. The remarkable treatment involved stem cells used to restore the man's disease-degenerated retinal pigment epithelial cells, which normally supply rod and cone photoreceptor cells with nutrients in the retina, maintaining your vision. The trial itself is specifically looking at the safety of use of these types of stem cells within human patients, however the treatment has proven particularly effective, and certainly bodes well for further stem cell-fuelled repair applications like this. [New Scientist]

The Moon's been hit by a massive explosion -- A 40kg rock smashed into the surface of the Moon at some 56,000mph causing a massive explosion equivalent to five tonnes of TNT being detonated. It created a bright flash that glowed like a 4th magnitude star, 10 times stronger than any other recorded, and could be seen with the naked eye.

The impact apparently occurred back in March, but has only just been spotted in video shot by NASA's automated lunar-monitoring equipment. NASA's now tasking its Lunar Reconnaissance Orbiter to have a look at the impact site and confirm what actually hit the Moon. Let's just hope it really is just a rock and not a rogue alien spacecraft, which is now building a space station on the dark side of the Moon in preparation to enslave us all. [NASA]

Researchers discovered that special hairy pads on the spider's legs, which enable spiders to climb smooth surfaces, also latch onto prey. In fact, new data suggests that these climbing pads actually evolved for catching prey first, and climbing second, which changes our thoughts about the evolution of spiders quite dramatically. It seems movies like Eight-legged Freaks weren't that far off the mark after all. [PLoS One]