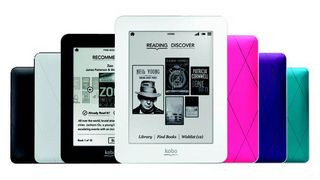 We checked out the Kobo Mini this week

It's been a busy old week here at TechRadar: we've got new phones, new tablets, new e-readers and a small tear in our eye as we wave goodbye to an old friend.

First up is Windows Phone 8, codenamed Apollo - but is it like Apollo 11, the one that landed on the moon, or is it like Apollo 13, the one that was all explodey and Tom Hanks-y? Mary Branscombe has been investigating, and she tells us it's very much the former: "this is a real step in quality from Microsoft and gives us hope for variety in the smartphone wars."

Did someone say smartphone wars? The Nexus 4 is Google's latest weapon in that particular battle, and Phil Lavelle reckons it's a little cracker. While it doesn't "solve famine, pick up the kids up from school and decipher Mandarin Chinese in a millisecond" the Nexus 4 "comes SO close to that, it's unreal." Phil is currently having a nice lie down in a darkened room.

Did someone say ten-inch tablet? No? Okay! The Nexus 10, you'll be stunned to discover, is the big brother to the Nexus 7 tablet, and it's a big cracker. James Rogerson's Big Book of Superlatives has been given a damn good thumbing for this one: it's "brilliant", "stunning" and "swingorilliant". OK, maybe not that last one.

It's good, but is anything good-er? We've updated our guide to the ten best tablet PCs in the world today, and while we don't want to give away the ending we can tell you that the top four places are taken by iPads and Nexuses.

Whether you're an Android fan, an Apple one or a Windows one there's never been a better time to get a tablet - and Gary Marshall reckons that for most people, smaller is better.

As he points out, small tablets used to be rubbish, and now they're great: "Processors are better, batteries are better, ecosystems are better, OSes are better... look at the huge strides Android has made in three years.

Compare an early Android crapper with a Nexus 7 and you'll see what I mean." That makes them hard to beat: "They're more portable than their bigger brothers.

They're lighter to hold, easier to fit into a large pocket or handbag, easier for kids to handle - and they're much, much cheaper too." Marshall is so confident that small tablets will be big sellers, he's promised to eat an iPad mini if it doesn't account for the lion's share of this quarter's iPad sales.

Many people buy tablets to read ebooks, but e-ink readers are still easier on the eyes - and they're much cheaper too. Would bookworms be better off with the £59.99 Kobo Mini, or its £99 big brother, the Kobo Glo? The cheaper Kobo is nice enough, Jamie Carter says, but it's a bargain basement offering: it'd be "a great occasional e-reader".

Ebook fiends would be better off with the slightly pricier Glo, which beats the similarly illuminated Kindle Paperwhite by supporting EPUB files without having to convert them first. Carter reckons it delivers "a top quality reading experience". It's a really nice bit of kit and an interesting alternative to the ubiquitous Kindle.

We didn't just say hello to a bunch of new things this week: we also said goodbye to an old friend. Windows Live Messenger, the service formerly known as MSN Messenger, is closing, and Microsoft is urging users to migrate to its Skype service instead.

Gary Marshall remembers Messenger's glory days very well: "For many of us MSN Messenger and Hotmail were part of the plumbing of the internet, the programs we used when we were supposed to be doing something else such as sleeping, working or studying," he says.

However, "that was a long time ago... these days, most of us want to talk somewhere else."