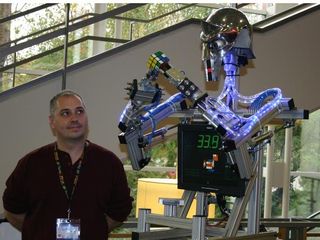 Would you trust this robot to solve your Rubik's Cube?

A robot has been invented that can solve any jumbled Rubik's Cube in just 35 seconds. The RuBot 2, created by inventor Pete Redmond, will be strutting its stuff at the London Toy Fair on Wednesday.

The RuBot has two hi-res webcams for its eyes. It picks up the Cube and scans all six sides using these eyes. It then uses "artificially intelligent neural-classifying software" to work out what moves are needed to solve the Cube.

And finally, its pneumatic arms swap the Cube from hand to hand to make the quick-fire turns.

A total of twelve million Rubik's Cubes were sold worldwide last year, but that doesn't really explain why anyone would want to build a robot to solve them. Especially as the human world record for solving the puzzle is currently 9.55 seconds - far quicker than the robot can manage.