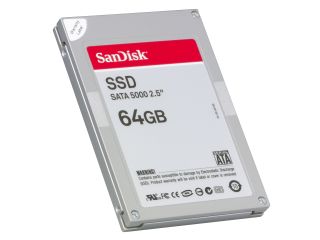 Scientists at the University of Leeds and IBM Research's Zurich lab have got one step closer to producing 'racetrack' memory - a new kind of solid-state storage that promises to be 100 times cheaper than flash memory SSDs.

Racetrack memory, a concept invented by Stuart Parkin at IBM Research's Almaden Lab, has no moving parts - instead it is the information which moves.

Using spin transfer physics, scientists force electrons (in the form of electrical current) to switch the magnetism of the domains, pushing them to a different location along a nanowire.

"The reason why the hard disc on your computer is likely to break is because it has moving parts which eventually wear out, but the racetrack method of storing information is much more reliable as all the parts are static," says Dr Chris Marrows of the University of Leeds.

The new research used an electron microscope to image a wall between two domains that lies in a notch in the side of the wire. This site, called a pinning centre, is where information starts and stops on its journey along the wire.

The researchers were then able to measure the current needed to blow the wall out of differently shaped notches, with the aim of reducing the current, and hence power, needed to move information along the wire.

"Magnetic racetrack memory is designed to replace the hard disc drive, and it's estimated that it could compete on price since it's very dense. It can store lots of bits of data on a small area of chip, as the information is stored in vertical towers," says Dr Marrows.

It is estimated that racetrack memory in a computer would be 100 times cheaper per bit than flash, and much faster than today's hard discs.

Don't hold your breath, though, as the researchers still think they're a decade away from consumer versions of the technology.