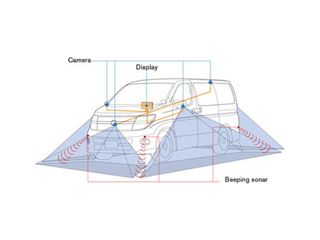 Sloppy drivers will doubtless be pleased to hear of the latest innovation from Nissan in Japan that makes parking cars in tight spaces considerably easier thanks to a combination of cameras and some smart engineering.

The ' Around View Monitor' system uses four wide-angle cameras mounted on the car's exterior to create a virtual bird's-eye view of the vehicle that makes manoeuvring it into a parking space as easy as possible.

A live video feed of the combined image appears on a dashboard display and is accompanied by graphics that show the driver the projected path of the car. Additionally, the cameras on the wing mirrors, grill and rear number plate work together with sonar sensors to warn of possible collisions with other vehicles or people.

Although there's no word of a European version of the system, the Japanese version, which is currently available installed in Nissan's Elgrand, will be adapted for use in its Infiniti EX35 model sold in North America in December.