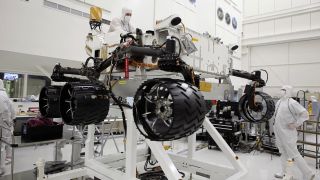 NASA is quite pleased with Curiosity's initial soil samples

Late last month NASA inadvertently caused a bit of a scene when scientists referred to one of Curiosity's discoveries as "one for the history books."

Since that announcement, NASA has downplayed the hype surrounding the latest rover findings, claiming "speculation that there are major new findings from the mission at this early stage are incorrect."

On Monday, NASA set the record straight officially, and revealed to the world just what it was that had those scientists so elated.

Analyzing the Martian soil for the first time, Curiosity was able to discover evidence of organic compounds.

According to NASA, the compounds uncovered included water, sulfur and chlorine-containing substances.

The soil was dug up at a site dubbed "Rocknest," though it's unclear at this stage if the substances are indeed indigenous to Mars, or if the materials fell from space.

There is also a chance the organic compounds were carried to Mars from Earth aboard the rover.

"We have no definitive detection of Martian organics at this point, but we will keep looking in the diverse environments of Gale Crater," said Paul Mahaffy, a Sample Analysis at Mars (SAM) principal investigator at NASA's Goddard Space Flight Center.

The Rocknest samples were composed of about half common volcanic minerals and half non-crystalline materials such as glass.

NASA did confirm that the chlorine was Martian-based, but evidence the carbon-based compounds were from the planet were inconclusive.

It could be some time until NASA learns the truth behind the organic material found by Curiosity, but this first soil sampling is a good sign of continued success during the mission.

As Curiosity continues on towards the ultimate destination of Mount Sharp, NASA seemed assured by the success of this initial test that Curiosity's onboard testing kits would prove invaluable later in the expedition.

"The synergies of the instruments and richness of the data sets give us great promise for using them at the mission's main science destination on Mount Sharp," said Curiosity Project Scientist John Grotzinger.

Curiosity will continue the task of determining whether or not the Gale Crater was ever a habitable environment for microbes, but the results will be slow in coming.

Despite not having what a layperson would call an exciting adventure thus far, it appears NASA is quite happy with Curiosity's progress.