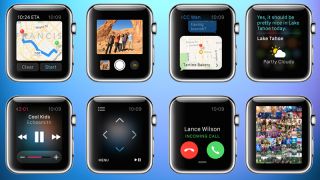 With the Apple Watch now available for pre-order, thousands of customers are eagerly awaiting April 24 to finally get their hands on Apple's much-hyped wearable - but a number of developers have warned to not expect too much from the early apps.

According to several app developers that were interviewed for a feature for Fast Company, there are a number of restrictions imposed by Apple on the WatchKit software development kit – which is used by developers to create apps for the Apple Watch.

These restrictions, which could be Apple's way of making sure battery life is conserved, as well as controlling what the user experience is like on the Apple Watch, are apparently frustrating developers and preventing them from making the apps they truly want to.

One of the biggest complaints is the Apple Watch's reliance on being connected to an iPhone to complete even simple tasks.

This means a lot of the processing power is given over to the more powerful iPhone, helping to keep the Apple Watch small and light while preserving battery, but the third party apps will cease to work if the Watch is too removed from the phone.

The WatchKit software development kit is also currently missing features that would allow developers to include dynamic transitions – so animations which make the apps look good, as well as improve the user experience, are very difficult to implement.

Animations are beamed from the iPhone to the Apple Watch, which means at the moment developers can't animate parts of a screen – such as buttons. Instead, the whole screen needs to be animated. Developers also can't control how content is scrolled through, or split the screen into two zones that can act independently.

Developers have also voiced their frustrations with the touch screen of the Apple Watch, with the screen currently only recognising basic gestures such as swipes and long presses.

This has led some apps to scale back their ambitions – for example, design studio argodesign wanted to make an Apple Watch app to complement its PEQ home automation app for iPhone and iPad, but could not replicated the feature of dragging a finger up or down to change the temperature or dim lights.

The touchscreen limitations have also caused developers to question if even Apple itself can deliver on the experiences it has promised, with one anonymous developer saying "Even something like being able to doodle on your watch, being able to share those pixels to a server and have that be recorded, you can't do that."

Not all Apple Watch apps are created equal

Perhaps the biggest bugbear of third party apps is that many of the limitations that are enforced on their apps aren't present on Apple's own apps.

Apple's apps run natively on the Apple Watch, so they aren't as dependent on a connection to the iPhone. For example, apps like Apple's Shazam app can access the Apple Watch's microphone – but at the moment other apps aren't allowed access.

This means that third party app developers are finding themselves in competition with Apple's apps, and the playing field isn't level.

Hopefully these are just teething problems, and Apple will loosen its restrictions on Apple Watch app developers. It's very early days for the Apple Watch, so we expect the apps to improve over time, but if you're unwrapping one on April 24, you might be initially disappointed with many of the apps.