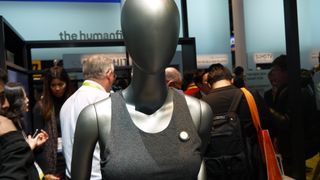 Samsung's new Body Compass 2.0 is rather curious – not just because I didn't know there was a v1.0, but because it seemed to go rather undetected on the Samsung stand at CES 2016.

The system looks rather awesome: a small module connects into smart clothing and can properly track you throughout a workout, figuring out whether or not you're performing lunges or squats correctly, counting reps or monitoring your vital signs.

The clothing is part of the system itself, being able to measure your body fully by being placed right next to your skin to monitor your movements more precisely.

We'll gloss over the fact that the video Samsung has made to show off Body Compass is rather on the sexist side (it's filled with in-shape women wearing tight clothing, and the first point is showing how the material can monitor your weight loss automatically), and focus on how awesome the system could be.

The idea is that your smartwatch will be the focal point of the system, telling you when to work out, giving you a notification when you perform an exercise correctly, and even monitoring your hydration levels and letting you know when you need to drink (although the last point was denied by a Samsung rep, despite the video clearly showing it).

Talking to the stand attendees was rather fruitless, as they didn't seem to know much about whether this system was ever going to make it into the 'real world', so it seems to be very much proof of concept right now.

However, if we could see smart fitness clothing in the near future that doesn't rely on a single sensor to register movement, that would be something game-changing… imagine being able to run and having your watch give you a couple of tips to run more injury free, or showing your muscle mass expanding over time (rather than focusing on weight loss).

It's clear the video is a very early look at what could be coming down the line in terms of smart clothing and e-fitness wear... come on Samsung, make this real.