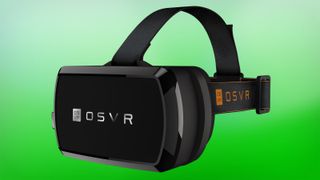 Razer has announced that version 1.3 of it's Open Source Virtual Reality (OSVR) dev kit will be up for public pre-order starting October 1.

According to Razer, version three of its OSVR HDK headset improves on its previous models with a new optics module that should lead to sharper images for each individual eye, which should mean that anyone that wears glasses won't need to while wearing the OSVR.

The display inside the headset has also been upgraded to a 5.5-inch full HD OLED display that Razer says will make VR videos or games running at 60fps clearer and brighter.

Though it's aimed at developers, anyone interested can pre-order the OSVR v1.3 HDK, priced at US$299.99, on 1 October. It will ship out later that month.

Razer has also announced that its OSVR content discovery platform, OSVR.org, is now available to anyone interested.

It hosts a curated list of VR content, including 360-videos and games, that will work on the OSVR, as well as including a list of VR stores with content supported by the OSVR HDK, including Steam.

The OSVR partner platform has also grown to 230 in total by adding 65 new companies, including Pixelboom and Glue Engine.