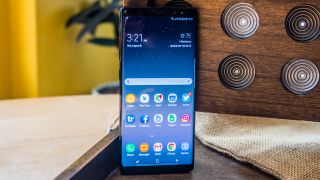 The Samsung Galaxy Note 9 is shaping up to be a 2018 powerhouse. A recent rumor states that the productivity and fun-focused phone may have a 4,000mAh battery that’s big enough to last for multiple days.

Despite sticking with a battery that you’d usually see in a 5.5-inch smartphone, the 6.3-inch Note 8 was still able to deliver all-day battery life. Theoretically, with a lot more juice in the tank, we could even be looking at multi-day performance with the Note 9.

Previously, we’ve heard that the Note 9 will feature a 3,850mAh battery – something this rumor states is still a possibility– but the jump up to 4,000mAh would defintiely be welcome.

Could the Note get even bigger?

The Note 8 arrived with a palm-stretching 6.3-inch screen, thus necessitating two-hand use for most of us. Whether it's because of a bigger battery, or simply the desire to outdo itself, the company may add even more size to the Note 9 by including a 6.4-inch display.

The sources of these rumors are dubious, both coming from Twitter, one of which claims to have originated on Weibo, a Chinese forum where news often breaks on upcoming smartphones.

As such, it’s tough to make the call on whether these rumors are likely to pan out. That said, the claims above don’t sound too wild, given they are both pretty close to what we’ve already reported on.

As we approach the Note 9’s launch, which will likely happen in August, we’re likely to hear even more about Samsung’s next phone.