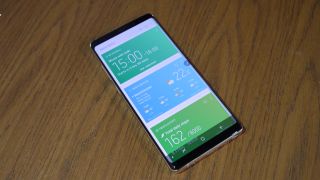 Update: Samsung has given us an official line, which we've included below.

Some owners of the Samsung Galaxy Note 8 are reporting that their handset is dying once it reaches a 0 percent charge and won't come back to life - not ideal if you're Samsung and you had to recall the Note 8's predecessor last year for an overheating problem.

For the time being the issue doesn't seem to be too widespread, and only appears to be affecting users in the US for the most part, but SamMobile has pulled together numerous forum posts and complaints that suggest this is more than just one or two isolated incidents we're dealing with.

Of course Samsung will swiftly replace your faulty Note 8 if it's still under warranty, but considering the company was at great pains to emphasize just how much testing the Note 8 battery went through, this is a blip that it could do without.

For the time being, Samsung seems to be in fact-finding mode. "We have yet to get any official report for this matter and are unable to comment until we obtain more specific information of the device," reads a statement the company sent us. "Any customers with a similar matter are encouraged to contact Samsung."

From hero to zero

Samsung will certainly be hoping it's a blip - right now it's not clear whether the problem lies with the hardware or the software of the Note 8. If it's the latter, then a fix could be rolled out via a software update.

Based on posts from users, some people do genuinely seem to have an issue, while others can get their Note 8 devices working fine even after going right down to a 0 percent battery charge. For the time being at least, it's probably wise not to let your own handset do the same.

In fact, that's good battery practice in general - whether you're using a Note 8 or an iPhone X, gadgets don't really like having their batteries fully drained, though it certainly shouldn't kill them completely.