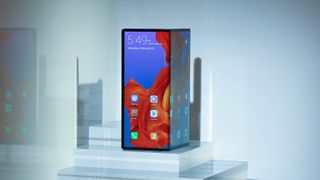 Samsung has had to make a few tweaks to the design of the Galaxy Fold to get it ready to go on sale, and it appears Huawei has done the same with its own foldable – new photos of the Huawei Mate X suggest a number of subtle changes have been made.

Chinese journalist Li Wei apparently ran into Huawei CEO Richard Yu at an airport and was able to snap a few photos of the Mate X as it looks now, having originally been unveiled at MWC 2019 in February.

A fourth camera sensor has been added on the back of the phone, most likely a time-of-flight (TOF sensor for judging depth, as well as a carbon fiber effect (or possibly actual carbon fiber) around certain parts of the handset.

There's now a bigger button to unhook the foldable part of the phone as well, which should make moving the Huawei Mate X between its open and folded states that little bit easier.

The problems the early review units of the Galaxy Fold ran into were mostly related to the hinge, but it's difficult to tell if Huawei has made any improvements here. It does bend in the opposite direction to the Galaxy Fold, with the screen outside.

As for actually getting our hands on the Mate X, Huawei has said the phone will be out by September, which means it's going to match the Samsung Galaxy Fold – and then the foldable phone market will be truly up and running.

Last month we heard that the Huawei Mate X was in its final testing phase so let's hope that any potential mechanical problems have been ironed out, and the handset works as advertised once it goes on sale.

With the US administration now apparently easing restrictions on Huawei's consumer electronics division, the phone should come with a fully stocked version of Android – and of course with 5G connectivity too.