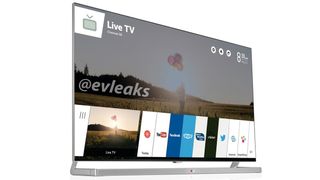 Pick a card, any card

LG's long-rumoured webOS TV has been hitting headlines ahead of CES 2014, where it's rumoured to be debuting, and we may have just been handed an early picture of what the smart TV will actually look like.

Outing the picture over on Twitter, unstoppable tipster @evleaks merely captioned the image with "webOS TV, by LG, 2014".

On the display of the TV we can see a bunch of apps running along the bottom, including a web browser, Skype, Facebook and YouTube.

If this picture is legitimate, it shows that LG has tinkered with the card-based interface of webOS that it bought from HP earlier this year, but it looks like multitasking is very much at its heart.

Last we heard, LG's TV is set to pack a 2.2GHz dual-core processor with 1.5GB of RAM. We contacted @evleaks for more information but he wouldn't confirm whether the alleged specs are on the money or not.

We also noticed that the date on top-right hand side of the TV is set to May 25. Not that we'd recommend reading too much into that, but there's always a chance that it could be when we'll see LG's webOS TV finally launch.