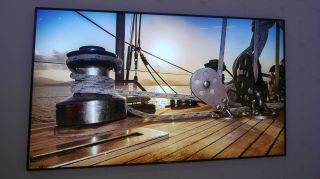 Tucked away in a dark corner, on a wall at IFA was a massive TV from Turkish consumer electronics giant Vestel; above it was a few letters that spelt out the future of television, 8K TV.

While you might never have heard of Vestel, it is, with UMC, one of the biggest producers of television sets in Europe and if you have purchased an own-brand TV set from Argos or Tesco, it is likely to have been produced by Vestel. In addition, it does produce entry level TV sets for Philips, Sharp, Toshiba and Panasonic.

So when the company puts out a working 8K television on display, it means business. Doesn't mean that you will soon be able to pick one up from Tesco anytime with your groceries though given that there's no mainstream content available for it to justify the investment.

Japanese broadcaster NHK showed off the technology at the London Olympics in 2012 and has already announced that it will broadcast in 8K in 2018 with mainstream availability being reached in 2020. These two dates coincide with the 2018 Winter Olympics in Pyeongchang, Korea and the 2020 Summer Olympics in Tokyo, Japan.

As for Vestel, no dates have been confirmed yet but its 7680 x 4320 pixel behemoth won't be the only one setting the world alight as Chinese vendor, SkyWorth, another IFA exhibitor also showcased a very similar product (8K, 98-inch) and Chinese manufacturer TCL confirmed in a statement that it will launch 8K television sets in 2018.