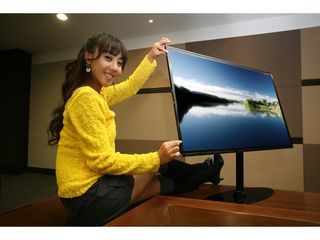 Samsung's thinnest-yet LCD TV will be hard to beat, especially by other large sets.

As we mentioned last week, Samsung has a few surprises in store at this week's Flat Panel Display International show in Japan and has been drip-feeding them to the press ahead of the show's opening on Wednesday.

The latest addition to the 'coming-soon' range of prototype screens is a 40-inch LCD television with a thickness of just 1cm. Although this is a full 7mm more than Sony's celebrated XEL-1 OLED TV, it's by far the thinnest set of its size. Sony's 3mm wonder measures just 11 inches across the diagonal.

Moreover, the Samsung screen manages full HD TV resolutions, which Sony's device cannot. Its LED backlight is rated at 92 per cent of NTSC colour saturation standards, which really just means it looks almost as good as a decent cathode-ray TV.

Away from the increasingly competitive field of thin displays, Samsung has also announced an 8.1-inch sheet of electronic paper, a 14.3-inch plastic screen, a 2.1-inch LCD that automatically adjusts its own brightness according to surroundings and a 7-inch touch screen with the sensors actually inside the glass.