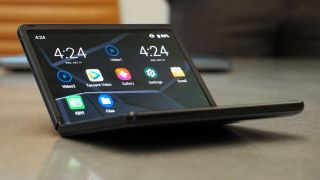 TCL will launch its first foldable phone in 2020, but it gave us a glimpse of a concept device in October 2019 to whet appetites and give us an idea of what the firm is planning.

While the foldable phone we got hands on with is unlikely to look exactly like the handset we'll see launch next year - it may even fold in a different way - it does show us TCL is edging closer to a final product.

Back in February, we saw a few of TCL's foldable concepts behind glass at MWC 2019, but they weren't ready to be handled. Fast forward seven months and here we are, with TCL's foldable phone concept in our grasp.

This is a concept phone, so there's currently no firm release date or price for the device - in fact the handset we handled won't actually go on sale, it'll be an updated version of what we saw.

We do know TCL will launch its first foldable phone in 2020, and it will be cheaper than the Samsung Galaxy Fold and Huawei Mate X which hover around the $2000 mark.

That's not to say TCL's foldable phone will be cheap, it will be affordable in context when compared to the current offerings on the market.

The TCL foldable concept is a working smartphone, but it's not perfect. Completely close the handset and it turns itself off (but can be easily switched back on) and the interface is a little sluggish under finger.

However, it's nothing to be alarmed about. That's the point of concept devices, to test out the hardware and software and find fixes before launching a consumer ready version.

TCL is very open about its plans for its foldable device. It has no desire to be 'first' to market, and would rather take its time to ensure everything is working correctly, and also to learn lessons of those who have launched before it to avoid any mistakes competitors make.

The well-publicized issues with the Samsung Galaxy Fold have made TCL go back and perform more research, development and testing in the hope of avoiding similar setbacks.

It clearly still has a way to go, but we're impressed with the progress so far. The butterfly hinge on its foldable phone feels robust, and moves smoothly. The bezels around the flexible display are slender, and there are four cameras on the rear, providing a wide scope of shooting options.

The screen is bright and clear, although doesn't appear to be anything higher than a Full HD resolution (we're yet to be given any firm specs for this particular device).

Open it out fully and there is a faint crease down the center of the screen where it folds - to be expected, but it can detract a little from what's on the display.

TCL is making good strides in the foldable phone market. The marked improvements over its MWC showing to this concept are clear, and it is on track for a 2020 launch.

It will be interesting to see how much it can undercut the current foldable phone incumbents by, and just what design and feature set it will opt for.

We're told we'll learn more about its foldable phone proposition during either CES 2020 in January, or MWC 2020 in February. In short, there's not too long to wait.