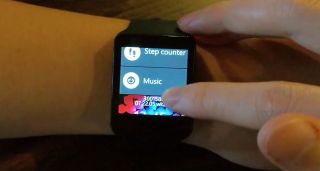 In the tech industry, there are many products that are dreamed up but for a variety of reasons never make it through production to final release, one such product being Nokia’s first attempt at a smartwatch.

Called the Moonraker, the smartwatch was a casualty of Microsoft’s takeover of Nokia’s mobile division in 2013. Though information on the device leaked out at different points in its development process, it was never entirely clear just how close it was to release before it was cancelled.

Apparently, it was close enough that Nokia had developed a production device for which YouTube channel Nokibar has now filmed a hands-on video.

It’s worth bearing in mind that this watch was in development three years ago, so it’s features aren’t mind-blowingly futuristic; it seems that it would have been on par with other smartwatches being launched at the time such as the Samsung Galaxy Gear.

What could have been

The smartwatch had a swipe motion based user interface, which revealed apps and notifications as well as a physical button for accessing the home screen.

It would have been fairly capable in terms of integrating mobile features, supporting phone calls, emails, messages, Facebook, and music controls. It also featured a basic step tracker, though this would have nothing on some of the fitness tracking capabilities we have in smartwatches now. Considering these are becoming a big draw of smartwatches this could have been problematic.

As far as appearance is concerned, though, the Moonraker would have been nothing special with a plain square watch face and fairly cheap looking thick plastic straps.

It does seem a shame that we never got the chance to see Nokia’s Moonraker released. Though we can only see a little on the hands-on video it looks like it would have been a good addition to the smartwatch market as it launched and would have provided a solid base to build upon for more advanced watches in the future.

Now that it seems the Nokia smartphone division is making a comeback under Microsoft, though, it’s not impossible that we could see a Nokia smartwatch at some point in the future.

You can see the hands-on in action below: