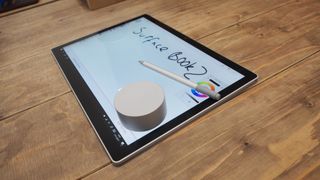 The teardown experts at iFixit have got their gadget-dismantling paws on the Surface Book 2, and the unsurprising news, given Microsoft’s previous track record with repairability ratings, is that the hybrid performed badly.

Overall the Surface Book sequel scored 1 out of 10 for ease of repair, which at least on the bright side (or perhaps the slightly-not-as-gloomy-side is a better way of putting it) was more than the Surface Laptop, which managed a big fat zero after it was released back in the summer (actually iFixit said it would give the device a score of -1, if that was possible).

The Surface Book 2 is flamed in the usual departments, including the use of strong glue to hold various components in place, such as the batteries, and the cover for the base.

The display was also criticized as being difficult to remove and replace, and further pot-shots were fired at the processor and RAM for being soldered onto the motherboard.

The positive point in terms of upgradability is that the SSD can be replaced (although it’s not easy to get to it in the first place). Interestingly, the SSD was also iFixit’s main positive point when it came to the Surface Pro 4 teardown two years ago (that device scored slightly better at 2 out of 10).

All that said, Microsoft is hardly alone in manufacturing products which suffer from these issues. Just look at Apple’s MacBooks, which are another famous offender with their iFixit ratings and overuse of glue (the MacBook Pro with Touch Bar also got a 1 out of 10, for example).

Of course, when it comes to these ultra-slim laptops, achieving thinness – and still fitting in a battery that gives solid longevity – can often mean making these kind of compromises on repairability and upgradability that affect the potential overall life of the machine.

Hopefully, if you do buy a Surface Book 2, you’ll never have any problems with it anyway. Microsoft is certainly talking up the increased reliability of its products of late.

And the Surface Book 2 is certainly a cracking hybrid notebook, as we found in our recent review: it’s well-designed, powerful, and manages a very impressive level of battery longevity.