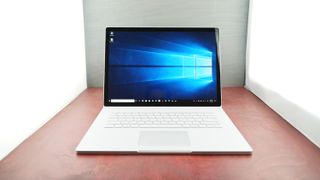 Surface Book 2 hybrids have received new firmware that cures an issue whereby the CPU was throttled down to run extremely slowly, as well as another serious performance-related problem that caused discrete GPUs to keep cutting out, leaving users relying on integrated graphics.

Let’s start with the processor throttling debacle, which also reportedly affected Surface Pro 6 users – although there’s no mention of any fix for them (more on that later).

This kicked off back in August, when a number of complaints cropped up online from users whose Surface devices were throttling the processor down as low as 400MHz, which is a ridiculously slow speed for a modern computer.

As we reported at the time, the issue was apparently due to a misfiring CPU flag, which indicated incorrectly that the Surface hardware was overhearing.

With the latest firmware release for the Surface Book 2, Microsoft says it has tackled the gremlin: “182.1004.139.0 resolves an issue where the CPU will throttle down to .4GHz, and improves battery stability.”

It's not clear exactly what Microsoft means by 'battery stability’, but any improvement of the battery is always welcome.

As for the ‘vanishing GPU’ issue, this one was actually caused by the Windows 10 May 2019 Update, and led to the upgrade being blocked on Surface Book 2 devices, which have discrete graphics.

It appeared to affect folks running the GTX 1060 mainly, causing the Surface to fall back on integrated graphics with predictably painful results for those trying to do more demanding tasks.

At any rate, Microsoft notes that it has resolved “an issue where the display adapter disappears from Device Manager” (although there was a bit more to it than the GPU simply not appearing there).

With this fix applied, in theory those Surface Book 2 users who have previously been blocked from the Windows 10 May 2019 Update should be able to download it.

So what about the Surface Pro 6 users who apparently suffered at the hands of the 400MHz bug? The October firmware update for that device doesn’t mention this particular problem, sadly.

There is some good news, though, as while the SP6 October update only does one thing, it’s a good one: it boosts battery life, Microsoft explicitly states, rather than stability.

Hopefully this means users will see more longevity from the hybrid while out and about. We have one of these devices, and the battery not lasting for all that long is one of our biggest issues, so we're keeping our fingers crossed that this helps out as promised.

For what it’s worth, we haven’t experienced any throttling, but some users certainly have going by those previous online reports. Hopefully a matching fix for the one delivered to the Surface Book 2 is in the pipeline for Surface Pro 6 users who have been having problems on the CPU throttling front.