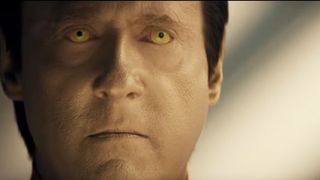 If you've been watching Star Trek: Picard, you may have a few questions about Data, the android who appears in Picard's dreams – and who may very well be the 'father' of new characters Dahj and Soji. Data was an important character in The Next Generation, which this new series is a direct continuation of, and he led an interesting life. So here's everything you need to know about Lieutenant Commander Data, including how he ultimately died in the movie Star Trek: Nemesis.

Data was an android designed by Dr. Noonian Soong, a brilliant cyberneticist. Other androids exist in the greater Star Trek universe, but Data's positronic brain gave him a greater depth and nuance of personality – to the point where the Federation considered him sentient, with the same rights as any biological being.

Data was unable to feel emotion, however, and struggled to understand the many idiosyncrasies of the human race. But he was still capable of loyalty, wisdom, friendship and sensitivity, which earned him many friends when he served aboard the Federation starship Enterprise.

How did Data join Starfleet?

A mysterious alien life-form known as the Crystalline Entity destroyed a colony on the planet Omicron Theta, and Data's deactivated body was discovered among the debris by the USS Tripoli. He was revived by the Federation, and was accepted into Starfleet Academy when it became apparent that he had achieved a level of sentience never before seen in a synthetic being.

Data graduated, despite the social challenges of being the only android in the academy, and served as an ensign aboard the USS Trieste, before being assigned to the Enterprise-D in 2364 – which is where we meet him in The Next Generation.

How did Data die in Star Trek: Nemesis?

Nemesis was the last of the Next Generation movies. Released in 2002, it starred Tom Hardy as Shinzon, a clone of Picard who stages a violent coup and becomes leader of the Romulan Empire. At the end of the movie, Data sacrifices his own life to save Picard's, destroying Shinzon's ship in the process. Before he died, Data downloaded his memories into a prototype Soong-type android, B-4. But this model's positronic brain was not as advanced as Data's, meaning he had none of his brother's individuality or personality: just raw memories.

How can Data be in Star Trek: Picard?

Brent Spiner reprises his role as Data in Star Trek: Picard, only in dreams so far. Picard is still haunted by the loss of his friend, and the heroic sacrifice he made to save his life. So whenever you see Data in the new series, it's Picard experiencing a vision; an echo of the past. But who knows what the rest of the series has in store? Perhaps we'll see a return of the old Data at some point in this story – although that might cheapen his sacrifice in Star Trek: Nemesis somewhat.

Alas, the Data we knew from The Next Generation is gone forever. But a major plot point in season one of Picard is his memories – the ones he downloaded to B-4 – being used to create two 'daughters', Dahj and Soji. These android twins were designed by Dr. Bruce Maddox, a cyberneticist, using a process called fractal neuronic cloning. So while Lieutenant Commander Data of the USS Enterprise, lover of cats and Sherlock Holmes, is no more, his spirit lives on in them.

Star Trek: Picard is released every Thursday on CBS All Access in the US, and every Friday on Amazon Prime internationally.