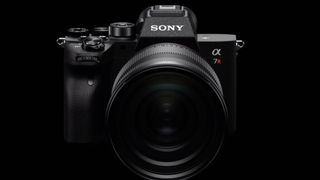 Sony has finally lifted the lid on what it's been teasing over the past few days, confirming that a new Sony A7R Mark IV will join its full-frame camera stable.

The A7R IV is the latest arrival in the company's hugely popular A7 line of mirrorless cameras, and follows the A7R III released in 2017. And with a new back-illuminated 61MP sensor at its heart, resolution is once again very much the focus here.

This pixel count is a significant step up from the 42.4MP A7R Mark III, and ahead of the 47.3MP Panasonic S1R, which has, up until now, offered the highest sensor resolution on a full-frame mirrorless camera.

The sensor can also be used on an APS-C crop mode, outputting images at 26MP, while it promises 15 stops of dynamic range.

As we would expect, the A7R Mark IV arrives with five-axis image stabilization built in, and this can work in partnership with the equivalent system inside E-mount lenses.

567 phase-detect AF points, meanwhile, cover 76% of the frame, and the system supports Real Time tracking for humans and animals, both in stills and videos. A number of other popular Sony features make the cut, such as the AF joystick around the back of the camera and the popular EyeAF feature, which identifies a subject's eyes – here even when shooting videos, a first for Sony.

Other key features include 4K video recording, which is captured from oversampled 6K footage, with S-Log2/3 and support for HLG video. The camera also shoots at up to 10fps at full resolution, with autofocus and autoexposure working throughout. That's the same as the A7R III, although it's impressive considering the added pixel count.

The camera's EVF packs 5.76 million dots – significantly higher than the 3.69 million dots of the A7R III – while the LCD below this responds to touch, and can be tilted up and down to facilitate high- and low-level shooting.

Sony also promises upgraded dust and moisture resistance for the body, together with an enhanced Multi Interface hotshoe and updated wireless connectivity options. The camera also mirrors the A7R III in offering twin card slots around its side, both for SD-type media and both supporting UHS-II cards.

As with recent A7 models, the camera arrives with a Z-series battery, although it's also launched along with a new VG-C4EM battery grip that will be compatible with the camera.