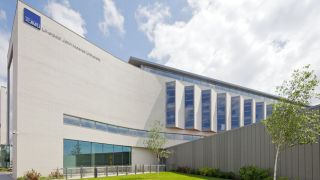 One of the objectives of OggCamp is to "get together as many interesting people who were doing good things with open hardware and software to exchange ideas".

The event was jointly, and efficiently, organised by two of the UK's leading podcast teams, Linux Outlaws and Ubuntu UK Podcast, with between 300 and 400 people attending on each of the two days.

There was a decent-sized auditorium, three lecture rooms of varying size, other areas for exhibition tables and the Hardware Jam. The exhibition area had representatives of various Linux User Groups and Free Software Groups, as well as a couple of commercial organisations - SUSE and O'Reilly.

The latter were doing brisk trade, I succumbed to their wares myself, and were also promoting their discount scheme for user groups. Interested LUG masters should contact them.

The speakers in the main auditorium, for the only talks that were scheduled in advance, included Simon Phipps, from the Open Source Initiative and the Open Rights Group, speaking about the Communication Data Bill; Pete Lomas, from the Raspberry Pi Foundation; and Stephen Fry.

Yes, it was the real Stephen Fry, although he was not there in person, citing "an appalling attack of indifference" as the reason. He had recorded a video, in which he answered questions put by the organisers on everything from how he got started in computers to his thoughts on Apple's walled garden, which were not entirely sympathetic, and open standards, which were.

This was clearly recorded at home on a webcam, not something done as part of his 'day job' but in his own time. His responses were witty, well informed and well received. The video was shown in the large auditorium, but you still had to be there early to get a seat.

The Raspberry Pi presentation was, unsurprisingly, also well attended. Pete Lomas, one of the hardware gurus behind the Pi, explained some of the decisions leading to the final hardware design and the compromises involved in keeping within the price target, as well as talking about the future.

The scheduled talks were only a small part of the event - the unconference aspect meant that anyone could propose a talk, and if it got enough votes they got a slot. A couple of years ago this was done with pieces of paper on a noticeboard, but this year the Campfire Manager software written specifically for OggCamp, but now used by other BarCamp-type events, was operational.

The full list of events and proposals was available as a web page, and visitors voted to attend talks, which were then allocated rooms appropriate to the number of attendees. This worked well, as there was good wireless connectivity throughout the venue - a positive thing, as it seemed half of the attendees were carrying Nexus 7 tablets. This resulted in some hard decisions for attendees when interesting topics inevitably clashed - there's a need for a version of MythTV for real life.

Not all of the talks were on serious or technical matters; the presentation on error messages over the years, including some generated live on stage, provided a great deal of amusement.

The Open Hardware Jam was a separate room full of Arduinos, Raspberry Pis, various other hardware configurations and the smell of soldering. The Raspberry Pi was selling like, well, hot pies, but all the the other exhibitors were getting their fair share of interest - from the perennial appearance of Bubblino to the Nanode, an Arduino-based board with wireless connectivity making it suitable for remote monitoring and control.

This was not just about seeing what hardware hackers were doing, visitors were encouraged to join in and try making something for themselves. This was particularly apparent where a RepRap 3D printer was being built using parts printed on another RepRap, with anyone passing having the chance to add to the project.