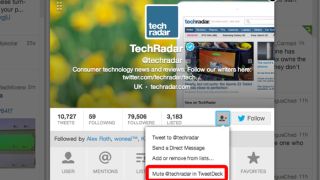 Twitter has introduced a new middle ground for keeping unwanted content out of your tweet-sphere via a new mute feature.

Rolling out to its iOS and Android apps as well as twitter.com over the coming weeks, the mute feature helps "edit your Twitter experience" by blocking out what you don't want to see from certain users.

The feature was spotted at the beginning of the month, but now Twitter is officially turning mute on for all.

With mute, tweets and retweets from specified users won't be visible in your home timeline, nor will you receive push or SMS text alerts from that user.

A muted user can still favorite (or "fave," as Twitter likes to say), reply to and retweet your tweets, but none of those actions will appear in your timeline.

Thankfully, muted users won't know you muted them, so there won't be (or shouldn't be) any awkward, "Why'd you mute me, bro?" questions to have to explain. It's less harsh than a block, but still enough to keep from experiencing Twitter update overload.

To set up mute from the Twitter app or from the web, hit the "more" option on a tweet, and then mute @username. To mute someone from their profile page, tap the gear icon and choose mute @username.