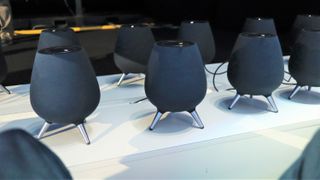 Third-party support has made Google Assistant and Amazon Alexa powerhouses in the world of voice assistants, and Samsung’s own Bixby will be getting the same treatment in November.

Samsung first announced its intentions for Bixby third-party developer support and the release of its software developer kit (SDK) in September, with CEO DJ Koh stating that he “does not want to see just six months or nine months performance, [...] this is like a long journey”.

Now, a report from the Wall Street Journal is claiming that the South Korean company will launch a series of what it calls ‘Capsules’ at its developer conference on November 7-8; the equivalent of Amazon Alexa’s “skills”.

More specifically, these Capsules will potentially allow applications such as Spotify and Netflix to integrate their functionality more seamlessly with voice commands issued to Bixby. The same goes for smart home products and applications.

Home is where the Bixby is

Bixby was first launched with the Galaxy S8 via a controversial dedicated button and has made its way into each Samsung flagship handset launched since, including the latest Galaxy Note 9.

Samsung has since announced its own smart home hub and speaker in the form of the Galaxy Home and stated that we’d learn more about the smart speaker at the aforementioned developer conference.

With all things considered, it makes a lot of sense for Samsung to reveal third-party developer support at this conference, but stay tuned to TechRadar as we cover every detail from the upcoming event.