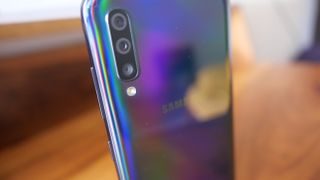 After Samsung showed off its 64MP and 108MP camera sensors the race was on for a smartphone to actually release with the super-powered sensors, and according to a new leak, we could know the names of each.

This leaks come from Sudhanshu Ambhore, who posted on Twitter a graph showing the camera specs of all the 2020 Samsung Galaxy A series phones. The names line up with rumors we've already heard, so that's not exactly news, but the camera specs are all new.

There are a few highlights from this list. Firstly, it seems that the Galaxy A51 and upwards (A61, A71, A81 and A91) could all be quad-camera devices, and with fairly powerful specs to boot (compared to current affordable quad-camera phones like the Honor 20).

Secondly, it seems even the most affordable Galaxy A phones will have three cameras. Since the Samsung Galaxy A10 currently only has one, that would be quite the jump.

Here are some key camera specs of Samsung Galaxy A series of 2020. pic.twitter.com/c7YifHcNUXAugust 15, 2019

Most interestingly, Samsung's 64MP and 108MP sensors are listed, for the Galaxy A81 and A91 respectively. Since this is Samsung's more affordable line of phones, those are some seriously impressive specs.

But are they correct?

The Galaxy A camera specs are in doubt

No sooner had Ambhore posted the specs, several other known phones leakers posted their takes – and they unanimously shot down the specs.

@UniverseIce, one of the most prolific leakers, said they'd asked their insiders, who'd called the list fake, and in the replies other known leakers backed this up.

It seems very logical, but I asked the relevant person, this is a fake, probably because it is too logical. https://t.co/sfJVg1eao6August 16, 2019

Ambhore has a fairly solid track record of leaks, but has also leaked some inaccurate information, like renders of the OnePlus 7 with a pop-up camera, which eventually became the OnePlus 7 Pro instead.

That doesn't mean he's an inaccurate leaker, but with several prolific voices in the phones community suggesting the specs are wrong, we're taking the side of caution.

As such, it's best to take the leaked specs with a massive pinch of salt – as some of the debunking leakers say, it seems too good to be true.

The 2019 Samsung Galaxy A series of phones has taken phones fans by storm though, as solid mid-range and budget phones, so we could see Samsung try to bring some pizzazz to the 2020 Galaxy A devices.