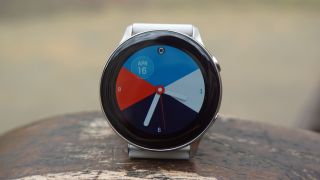 Samsung is announcing its next tablet later today, and the company has also confirmed it will be introducing a new smartwatch next week.

August 5 is the big day for the next smartwatch from Samsung, and it's expected to be called the Samsung Galaxy Watch Active 2. That device has been leaked consistently over the past few months.

Samsung will be sharing all of the details at 10AM ET (7AM PT, 3PM BST or midnight ACT on August 6 for those in Australia) come August 5, but it's currently unclear if there will be a live event or if it will just announce the product on its website.

This news all comes from a 20 second teaser video on Samsung's website that doesn't outright confirm the Galaxy Watch Active 2's name, but the brief glimpses make it look similar to the last-gen watch.

The video description reads, "Say hello to the new Galaxy Watch, your assistant to keep you fit and on top of your day."

A lot of the design elements are expected to be similar between the original Galaxy Watch Active and this next-gen version, but new rumored features include an ECG monitor as well as a 4G variant.

If you're waiting for the Samsung Galaxy Note 10, it's still expected we'll hear about that at Samsung's Unpacked event on August 7.