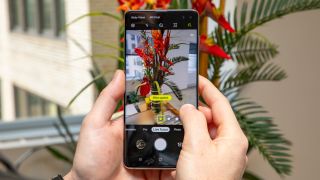 Now that smartphones can have up to five cameras, with different lenses, it can be quite a struggle working out how best to take a picture – should you go for ultra-wide, or zoomed-in, or just a standard shot? Well it seems the Samsung Galaxy S20 phones might have the perfect solution to that.

According to prolific leaker Max Weinbach, the Samsung Galaxy S20 handsets will have a feature called 'Quick Take' which allows you to press one button and capture the same picture from multiple lenses. This could let you take a zoomed picture as well as a standard one, or an ultra-wide at the same time as the basic picture.

Weinbach specifies that the phone will take pictures from two or three lenses, so with the powerful Samsung Galaxy S20 Ultra that's expected to have four cameras, it might not use every snapper. In general, though, this should cover your photography bases.

It's worth pointing out that this feature isn't totally new, as a similar feature has popped up on a few LG phones before, and some third-party apps also let you do the same, but with the Samsung Galaxy S20 expected to be a photography powerhouse, this could be the best phone to allow the function.

This feature would save you the time of framing up your picture and flicking between lenses to take the perfect shot – if it works right, that is, but we've got a few reservations.

Will this feature work right?

also because you guys totally missed it in the S20 one, the S20 will take pics out of 2 or 3 of the lenses and will let you choose pictures after the fact. It's called Quick TakeFebruary 2, 2020

When you take a picture with a smartphone, the processor has to do a lot of work in a short period of time and it can often tax a chipset – this is especially the case for high-res sensors, like what we're expecting the Samsung Galaxy S20 to use.

The Galaxy S20 Ultra, for example, is expected to have 108MP, 48MP and 12MP cameras, and if they were all to shoot at the same time, the chipset might have trouble handling it all.

Sure, the new Samsung phones are set to use the top-end Snapdragon 865 processor, so if any devices can handle it these phones can. But, especially if you're using Quick Take in rapid succession, we're dubious the phone could handle it all.

We'll be sure to find out when the phones are launched – we're expecting the Samsung Galaxy S20 launch event to be on February 11, with a release on March 6, so stay tuned to TechRadar then for our in-depth reviews of the devices.