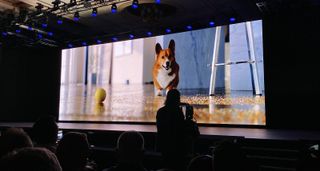 Samsung doesn’t have too many new consumer-ready products to show off at CES 2020 - instead, it’s outlining a more connected and experience-driven future for its device lineup. One new device that could be a key part of that goal? Ballie, the rolling assistant robot that ties the whole house together.

Well, for now Ballie’s just a concept, with no release plans or price, but it fits in with Samsung’s forecasts for future tech by being, well, more human.

At the CES 2020 Samsung keynote, and in booth demos, we got to see Ballie - a literal bright-colored ball with a camera cluster - playfully follow its owner about the house. Unless, of course, the owner bends down and calls the little ‘bot - at which point it comes rolling up into their hand. It’s even more adorable to see in person.

This cuteness makes it seem like a signature part of Samsung’s new strategy: smart speakers already perform many of Ballie’s suggested functionality, like taking notes or reminding users of calendar reminders. But in those setups, you’re essentially speaking to the air, the abstract concept of home.

Instead, Ballie is a physical node in your network, rolling around at a slow clip that’s familiar and, most importantly, present. It’s easy to keep track of and talk to. And heck, its cuteness makes Ballie harder to ignore.

While it’s still a concept - we didn’t see Ballie do everything Samsung claimed it could - the point of the bot is to interface with your existing connected home. If your camera detects a spill, the rolling ‘bot goes to investigate and then sends your robot vacuum over to clean. And then Ballie will use the camera footage to tell you who caused the mess. Yes, Ballie would narc on your messy dog.

This makes Ballie feel a bit like a personal butler - a cute, subservient companion rolling through the house to check that everything’s in order. Combine that with the Bot Chef shown off in Samsung’s booth that cooks with you, and the smart fridge that tells you what you what meals you can make with ingredients on hand, and the physically interactive home the company envisions is warm and active - “a living organism,” as Samsung SVP Federico Casalegno described it at the Samsung CES 2020 keynote.

That’s a lot more present than the cold, sterile smart homes we have today, where users bark orders into the ether. Even the far-flung future of Blade Runner 2049 grappled with the limits of intangible companionship - and even a silly rolling robot looking like a headless BB-8 from Star Wars is more comforting than a hologram.