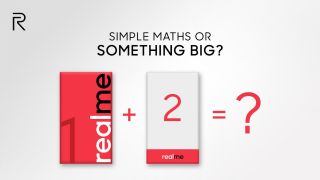 Realme, the spin-off brand from Oppo has started teasing the Realme 3 on its official Twitter account. On Tuesday, a tweet went out from Realme Mobiles which asked readers to “put 1 and 2 together.” While the obvious reference here is the Realme 3, there has strangely been no information regarding the upcoming smartphone.

The image accompanying the tweet showcases the retail boxes of both the Realme 1 and Realme 2 and makes it fairly obvious that it is regarding the next phone in the lineup, the Realme 3.

Being a 9-month-old company, Realme has five products in its smartphone catalog along with a couple of complementing accessories. Realme smartphones have received a good response with its first phone, the Realme 1 going on to sell more than 400,000 units in just the first month of launch. It’s successor, the Realme 2 met with an even better response, selling over 200,000 units in 5 minutes on the day of its first sale.

As the company gears up to launch the Realme 3 in India, company CEO Madhav Sheth disclosed in an interview with The Indian Express that the company wasn’t going to jump the triple-camera bandwagon anytime soon as they didn’t see any value in that.

The Realme 3 could have a plastic built like the Realme 2 Pro with different finishes on the back to make it stand out. We will know more as we near the official launch of the Realme 3 in India.