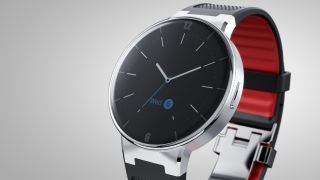 Wearables is the big buzzword for 2015, and Alcatel has launched its own offering at CES 2015 in Las Vegas with the OneTouch Watch.

The OneTouch Watch doesn't run Android Wear, a surprising move for a firm which is known for its fleet of budget Android phones, with the firm opting for its own OS providing support for Google's operating system as well as Apple's iOS.

Your Android phone will need to be running version 4.3 (Jelly Bean) or higher, while iPhone users will need to ensure they're rocking at least iOS 7.

It sports a fully circular 1.22-inch display like the LG G Watch R, although the design of the OneTouch Watch is more accustomed to the Moto 360.

There are a variety of features packed into the 10.5mm thick body with an accelerometer, gyro, altimeter, heart rate sensor, e-compass, NFC tag, Bluetooth 4.0, vibration motor and IP67 water and dust resistance all present.

That means it'll be able to track your steps, sleep, distance covered and calories burned as well as a variety of other fitness functions and all your smartphone notifications will be delivered to your wrist.

Too good to be true?

In fact the only feature obviously missing is GPS, and only the Sony Smartwatch 3 can boast that at the moment.

A troubling feature is the 210mAh battery which Alcatel claims can last 2-5 days, but the G Watch R can only go two days max with a 410mAh power pack. The OneTouch Watch, however, can be charged easily by plugging the end of the strap into a USB port.

It's the potential price though that could make the OneTouch Watch a winner, with Alcatel saying it will be offered "at a fraction of the cost of competitors."

Keep an eye out for our hands on: Alcatel OneTouch Watch review as we'll be checking out the wearable live from Las Vegas very soon.