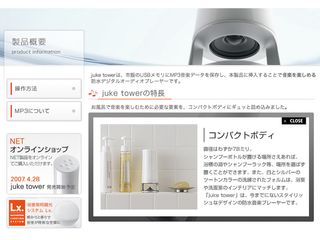 The Juke Tower MP3 player is ready to hit the showers.

Anyone who spends an unusual amount of time in the bath and is tired of having to strain over the sound of gurgling water to catch one's tunes of choice on the smallest room's radio will doubtless be pleased to hear of the latest eye-catching waterproof MP3 player from Noritz Japan .

The ¥10,500 (£45) Juke Tower is an 18cm-tall cylinder designed to fit in with a typical bathroom - indeed, Noritz describes it as looking like "a bottle of shampoo." The speaker arrangement is also pretty clever, with a 0.5W loudspeaker in the bottom of the tower pointing downwards at an audio reflector that disperses sound out through 360 degrees.

Waterproofing on the 300g, MP3-only tower meets the IPX5 international standard that certifies it can withstand water sprayed from a nozzle (i.e. a shower head) and power is courtesy of three AA batteries, which should stretch to 12 hours.

Given the attractively simple red LED display on the front and a topside control pad, the only thing likely to deter potential buyers is the onboard memory. With precisely zero memory of its own, the Juke Tower needs to get its fix from any USB mass storage stick, which isn't too onerous if you happen to have one lying around. Any size from 32MB to 2GB is supported.