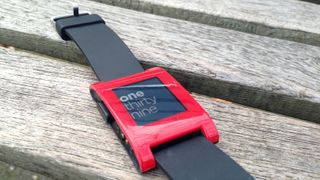 You got your fitness tracking in my Pebble

The makers of the Pebble Steel smartwatch and Misfit Shine health monitor have joined forces to take on the wearables industry together.

Like Mad Men's Sterling Cooper Draper Pryce and Cutler, Gleason and Chaough, both companies bring a little something to this partnership - though neither is shortening its name just yet.

According to the announcement, the collaboration will allow Pebble to integrate Misfit's "state-of-the-art activity tracking" in its smartwatches.

That means starting today Pebble owners can download the Misfit "watchapp," which counts steps and tracks other activities, from the Pebble app store. And the latest Misfit iOS app update, available soon, will connect with Pebble smartwatches to track additional metrics like burned calories and distance traveled.

More than a feeling

Add Misfit to a list of Pebble collaborators that also includes companies like RunKeeper, Strava, Puma, and others. But Pebble plus Misfit might go even further than these other partnerships have, the companies suggest.

"This is the first milestone in an ongoing partnership and collaboration between Pebble and Misfit that aims to provide intuitive health and fitness tracking for all," Pebble's announcement says.

Both sides have style, but their individual efforts up to this point have proved that style alone won't sell wearables.

Unless that style is Apple's, since when the iWatch hits the scene it'll probably sell like popsicles on a hot summer's day.