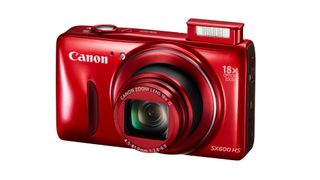 First up is the PowerShot SX600 HS, which features a 16 million pixel CMOS sensor alongside a Canon Digic 4+ processor. It also features Canon's own HS (high sensitivity) system, which promises high quality images when shooting in low light.

It also features an 18x optical zoom, which is 25mm at its widest point and 450mm at the telephoto end of the range. The camera also utilizes 36x ZoomPlus technology (a sort of digital zoom) to take that up to a staggering 900mm, all in something which should comfortably fit into a pocket.

Canon is also keen to appeal to the Instagram generation and includes Creative Shot mode on the new cameras.

When using this mode, the camera will create up to six different versions of one image. You can select from four themes (Monochrome, Retro, Special and Natural), giving a total of 46 creative effects.

Hybrid Auto mode, something which has been appearing on Canon compacts for some time, is also included. This feature automatically records four seconds of movie footage before every still shot is taken, combining the clips at the end of the day for a record of the day.

Full HD video recording is also available, as is integrated Wi-Fi and NFC.

The second camera, the IXUS 265 (called the PowerShot ELPH 340 HS in the US), features many similar features to the PowerShot SX600 but slots into the more stylish range of Canon compacts.

To facilitate a sleeker design, it only features a 12x optical zoom lens, boosted up to 24x by ZoomPLus. It does still feature a 16 million pixel sensor though.