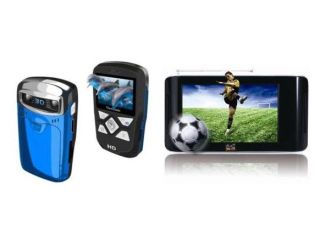 ViewSonic is unveiling a 3D camcorder and a portable 3D television at IFA, along with additions to its monitor, media streamer and eBook reader ranges.

ViewSonic, who will also be showing off two ViewPad tablets, believes that 3D is a key technology for consumers and is hoping to cash in on the halo effect of the increase in 3D TV.

"ViewSonic are focused on providing a full 3D experience, allowing our users to not only view 3D in the best possible way, but now create their own affordable content." said James Coulson, marketing manager, ViewSonic Europe.

"We believe by making 3D simple to use, whilst providing a complete solution, we can introduce 3D technology to consumers who were hesitant about new technology or concerned about the cost."

The 3D camcorder is capable of recording at 720p, and also has an integrated 3D display – with a UK release date pending but a price tag set at £199.

Also on display will be 3D digital camera and a 3D digital photo frame, along with, intriguingly, a portable 3D TV.

"In addition to the new tablet range, visitors to the ViewSonic stand will be able to try first-hand a range of products, including the new VPC220, a fully all-in-one PC; the VMP74, an award winning HD media-streamer and the VEB625, a touch screen eBook reader with wi-fi connectivity," adds ViewSonic's release.